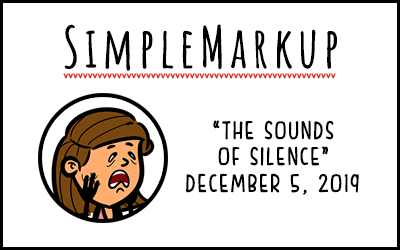 I am overdue on posting the comic this week (last week was intentional due to Thanksgiving) because I’ve been dealing with something that had me on the brink of insanity. More on that below.

This comic is straight from my life.

Like many freelance editors, I work from home. My “office” is in our living room, which is great usually, because I get to enjoy the breeze coming in the front door, I can easily hear the mailman with packages, and if I want to sort-of watch TV with everyone, I just turn around.

But somewhere around three to four weeks ago, an alarm up the street started blaring a high-pitched WHEEW WHEEW WHEEW all day long, during my peak productivity hours. It wasn’t really noticeable until maybe a week in because my brain sort of assumed it would be taken care of.

I estimate it took me another week to be fed up enough to actually leave my house—you know it was bad at this point for an introvert to do this—and go walking around the neighborhood to find the source and call the police. It was a house. One that I thought was abandoned but was protected like it’s got gold or drugs or slaves or vampires or zombies or something inside. (Look, I edit fiction. I have an active imagination.) It’s got chains hanging from the house, along with a hook, and there are red smears on the side of the house too.

Oh, but it’s just an alarm, right? How bad can it be? Click here to listen to it.

I started keeping a log, and it was insane. I was going bonkers, and I had deadlines, damn it!

I called the police on November 22. A week went by, and I called again on November 30 after a full week of this madness. I called again on December 3, and by that point I was finally just done. I filled out a police report and gave a written statement, getting it on the record that it was affecting my mental health.

I mean seriously, you try listening to 45-second stretches of that every other minute for three hours anywhere in your house for a month. Other neighbors saw us on the street and came out to voice their complaints as well. The officer told me they’d been getting calls from all over the neighborhood. There was no alarm company. In fact, I just went on Amazon and did a quick search, and I found the damn things.

So yeah, my neighbor bought three of these cheap $16 alarms and drove everyone insane for weeks. And I’m guessing she never really had to deal with it because she was at work, and the blasted things didn’t go off much at night. The police were apparently in contact with her, and she tried cutting her trees, moving the alarms, and blaming neighborhood cats, so she knew people were upset, and yet she kept trying to keep them.

Anyway, finally, yesterday, I heard two quick WHEEWs at around 6:30 a.m., and then nothing since. I drove by her house like a stalker and saw that she’d removed them.

And I actually got. Work. Done. FINALLY.

But yeah, the rest of the “noise” I deal with working at home is still there. At least the whining of hungry children isn’t like an icepick to my sanity, though.