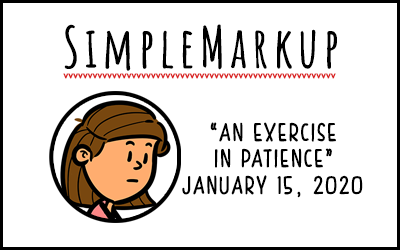 Oof, half the month is gone already. That’s a sure sign that I’ll sneeze, and it’ll be 2021 when I open my eyes again. It’s been nice this month so far in that I haven’t been massively stressed, which was taking a bigger toll on me than I realized in the last six months of 2019. I’m still hitting my daily productivity goals (though my to-do list remains as out of control as ever) while not feeling immense pressure.

That said, I still have to work from waking to sleeping, so I definitely have more optimizing to do.

This week, Edie’s starting a fresh edit, but she’s in for a rude awakening when she opens the file!

And before you laugh at the absurdity of it, I’ve seen with my own eyes red-highlighted text with some colored font. I can’t remember which manuscript it was to go check. Not that I’d want to subject my eyes to something like that again…

Anyway, my morning was eaten up by an errand, so I’ve got to get my work engine going. Have a great rest of your week!