This is Part 2 of my review series on Simply Ming One-Pot Meals: Quick, Healthy & Affordable Recipes

, which will cover the cooking demonstration and book signing with celebrity chef Ming Tsai that I attended at Macy’s Ala Moana on November 16, 2010.

I had originally stated that I would start cooking in Part 2, but since I was able to attend this event, I’ll move cooking tryouts to Part 3.

I was invited to this event by a PR woman at Macy’s, who was doing a search for Hawaii-based food bloggers and found my bento blog. At first I thought I was getting a reserved seat, but then when I read her press release again, I realized she just wanted a warm body to show up, with no reserved seating. This was disappointing, even more so after actually attending the event.

A ton of people showed up for his cooking demonstration. I was told to show up at 5:30, but the event didn’t start until 6:00. I got to the third floor at about 5:15 and the line was already roping around the cooking section. The line was terribly organized. Once all the 100 seats were taken, everyone had to just file around.

The problem with this was that you could get to the demo area from like 5 different parts of the store, so anyone after the 100 people got screwed waiting in line because everyone else who didn’t even notice the line had already taken spots around the seats. 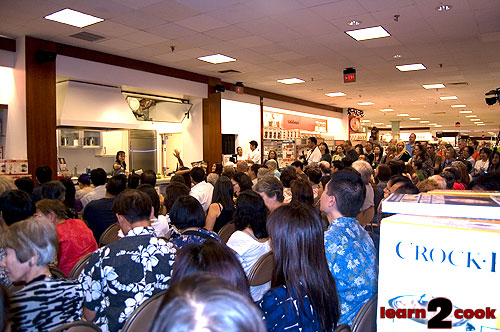 Here you can see everyone waiting. I managed to squeeze my big butt to the front of the back. 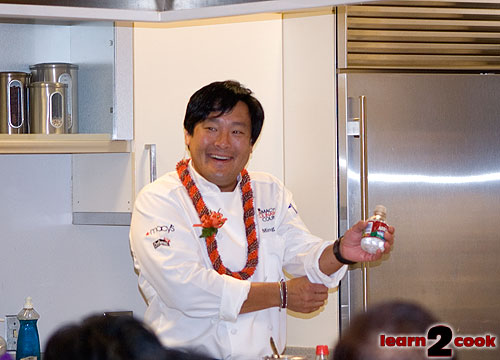 After a while, Ming Tsai came out, got leid, and began talking about his being voted out of The Next Iron Chef. At first, his jokes were pretty funny, with him cracking jokes at himself. As time went on though, he kept at it and I started to get turned off by his blatant bitterness over the show. He talked about how Food Network is stupid. He called the show something like The Next Dumb Chef.

First time, funny. Fifth time, not so much.

I mean, I don’t watch the show, but sheesh dude. We get it. 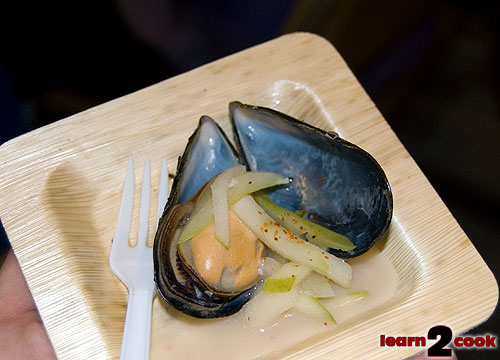 His first dish was very unusual: Black-Pepper Sake Mussels with Granny Smith Apples. While this isn’t a dish I’d make for my family because my children are still in that too-young-for-chewy-sea-creatures stage in life, I am happy to say that I got to eat the actual dish that Ming cooked.

Once he was done, the Macy’s assistants began to bring out little plate samplers for the audience to try. The seated people got the samples first, but when they ran out, they took his just-cooked dish and brought out more for the back crowd. While an odd combo, it did taste quite good. 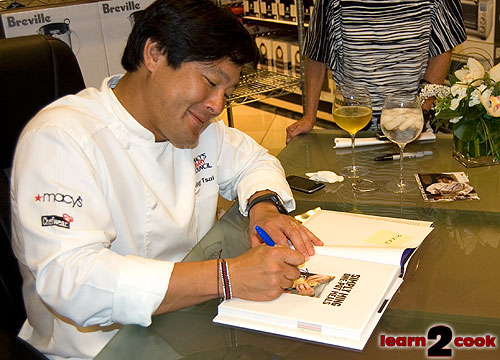 Ming cooked a total of three dishes, but I’d heard before the demo started that there was another line for the book signing that would come afterward and that he would only be signing the first 150 books. At this point I was freaking starving, since it was about 6:45 and the samples of the next dish didn’t look like they’d be reaching my area, so I decided to skip his last two samples and head for the book line. It’s a good thing I did because there were about 50 people ahead of me. 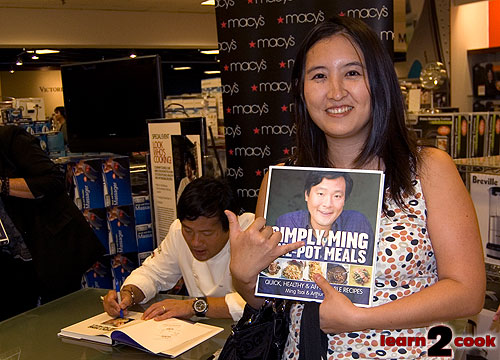 Oddly enough, the woman in front of me recognized me and asked if my name was Pikko. She knew me from Twitter. The man she was with agreed to take a picture of me standing in front of him.

Despite what I said about what a bitter guy he is, he was very nice to his fans. I enjoyed the one sample I had and hope to try something out next week, even though I’m intimidated by the book.