I have a long history of terrifying chocolate disasters, the most popular documentation being my Oreo Truffles Ordeal of 2010. I completely hate chocolate dipping because I seem to be utterly incapable of making anything without ruining at least one batch of chocolate and shrieking in anguish.

This is why when I decided to make chocolate covered strawberries, I was going to use something even I couldn’t fail at: CANDY MELTS.

Seriously it’s got this little label on the front that says “MADE TO MELT”. Well, hallelujah! 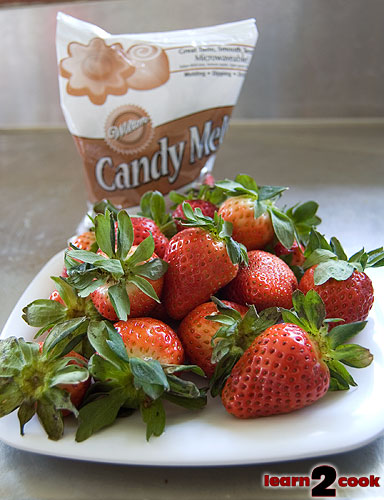 One of the most important lessons I’ve learned from the past is this:

I’m not saying your kitchen will catch on fire if you get water in your melted chocolate. It’ll just clump up immediately and you’ll want to set fire to your kitchen.

Since I live on a hot, tropical island, I had my strawberries in the fridge and so after I washed them, I had to let them come down to room temperature so that they could get all the sweat out of their systems. After that, I dried each one off with a paper towel.

The back of the package says that if I use a double boiler, I should let the water come to a slow boil on low and then shut off the heat, remove the pot from the stove, and then just let the candies melt by stirring constantly. I had my doubts, but it worked. 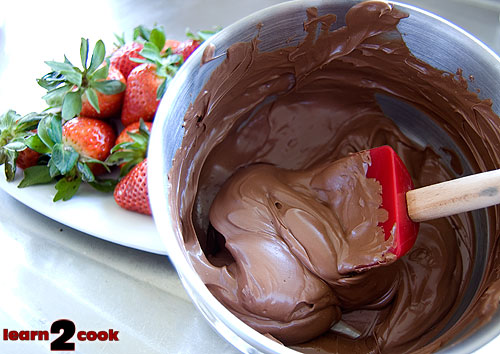 Baby Girl helped me dip them. 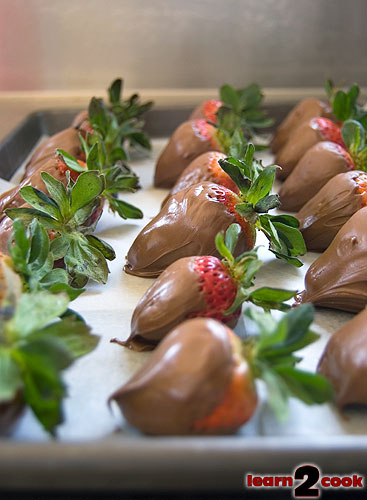 We held them by their leaves and dipped them in, rocking them back and forth to cover where it couldn’t reach. We then laid them on pieces of wax paper and gently fanned the leaves back down. 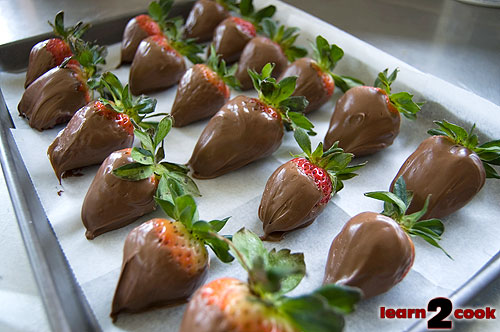 I was pretty happy that I managed to wash just the right amount that could fit on the pan. 😀 We just left them out to dry for a bit. I had read somewhere that you shouldn’t refrigerate them for a long time because the strawberries start oozing juice, so they stayed out until just before dinner. 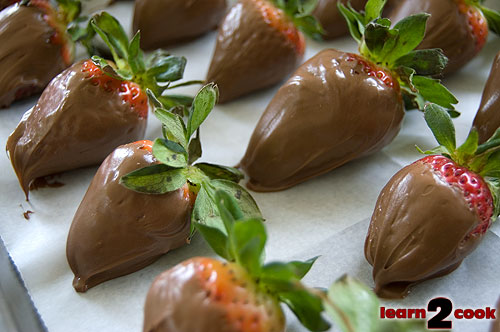 A closer look. No real point other than to brag that I was able to dip something in chocolate with little effort and a six year old to help. 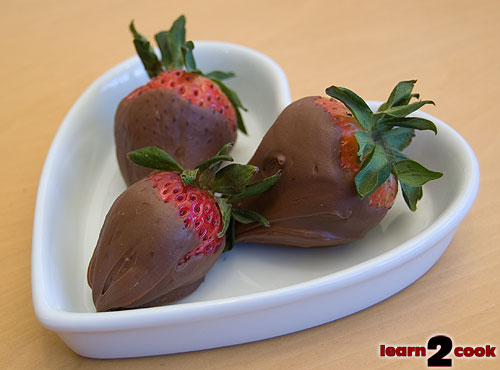 Now that I’ve showed how easy it was to use chocolate melts, I have to confess that I still managed to ruin some chocolate this time around. Before I even remembered that I had bought the bag of melts, I threw chocolate chips into my double boiler and then forgot about it. I went back later and it was still ok, but they just didn’t melt very well and I threw it out.

And so, chocolate had one last laugh on me. 🙁

Here’s what we had for dinner: filet mignon! I bought 4 filets at Costco for $26, a total of 2 1/4 lbs of tenderloin! I wrapped them in bacon secured with toothpicks, then pan seared them, and finally baked them in the oven at 400 degrees F for about 8-10 minutes. These were really thick and one was way thicker than the others, so that one I left in the oven for about 4 extra minutes after I’d shut the oven off. The thinner ones were done in 8 minutes and they came out just right!