As many of my online friends know, I’m one of those weird people that have a huge toy-crush on the Japanese tv mascot Domokun. I have a little brigade of colored little Domo-qees around my house, making hilarious poses and trying to bite various things.

That means that when the new “flocked” Domo toys became available, I was suddenly gasping for air and wanting one immediately.

There are two different sizes, 8 inches and 4 inches. Not wanting to completely splurge on the 8-incher, I bought the 4-incher to see what this whole “flocked” business was all about.

Apparently, “flocked” means absurdly fuzzy and fun to touch. Smooth like a peach, these flocked Domos are extremely fun to pet and look just as gorgeous in person as they do in photos. Their legs don’t move, but their arms swing up and down with ease.

His eyes look to be made out of black plastic, which hopefully means that the color won’t start coming off like it’s been doing on my painted plastic Domo-qee eyes. The box recommends this Domo for ages 8 and up, but I can tell you right now that my two kids, ages 5 and 6, immediately went wild when they saw a new “Daddy Domo” up on the bookshelf. They began fighting over who got to hold him first and tantrums were thrown when one had Domo for too long. Eventually, I had to step in and put him back on the shelf.

The only downside to this figure is that it’s made in China, something that’s always a negative in my book. Still, it doesn’t mean I return or don’t use items from there. I’m keeping this guy for sure!

A limited collector’s edition figure, this is something you need to buy soon, as no doubt they’ll be snapped up all over the place by rabid Domo fans. J-Box sells both the 4″ figure ($15.00) and the 8″ figure ($35.00), which makes it an excellent choice for spending affiliate credit on, if you have some to spare. If you want a much wider selection and a lower price, head over to Amazon where you’ll find a wide variety of colors available (some only available for pre-order) including Winter Green

Be warned, the 4″ Domokun is a bit of a bad influence on Domo Qees… 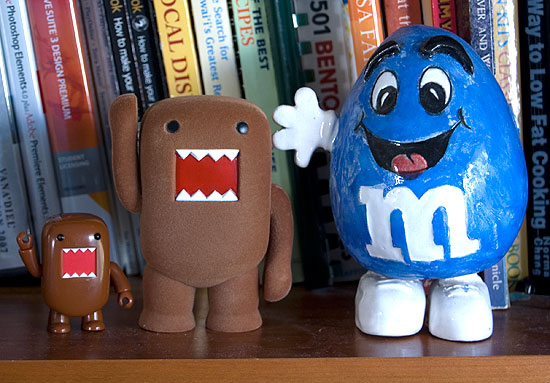 As you can see, he’s already teaching Tonkatsu some naughty things, like mocking my M&M man statue I made in high school.