, it was nice to have something else to look forward to for once. Something that would probably happen on time and be reliable because, well, it’s HBO. You know HBO can deliver.

It was hard to only get information from George’s non-blog because frankly, all I could think was, “SHOULDN’T YOU BE WRITING?!?!”

As time went on though, HBO began to run their PR engine on the show and more and more information started to come out. Promos with “Winter is Coming” popped up and pictures were flashed on EW. I agonized over hair color and casting choices (seriously, who picked that ugly ass kid for Robb?) and read with jealousy as New Yorkers and Los Angelenos got to eat food from Westeros.

Finally, on Sunday, Winter was here.

I’m not sure how I feel about the intro yet. It was trippy and cool, that’s for sure, but I wasn’t sure what the ball of fire was. The Light of Rh’llor perhaps? It reminded me of Rome’s intro. 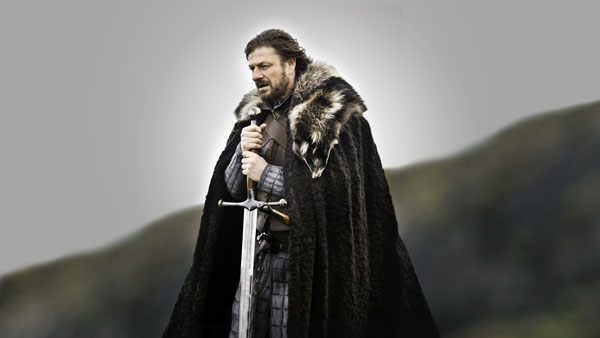 Boromir, now with fur-lined cloak!I couldn’t resist watching the sneak peek last week and so I’d seen everything up until the execution of Gareth. From the announcement of his casting, I wasn’t happy with Sean Bean as Ned, but as time went on and pictures were released, I realized that he did indeed look the part of our overly noble northman. After last night, I’m totally sold on him.

Jamie was appropriately smokin’ hot, as was expected from the publicity photos, but seeing him smile and joke around with his siblings made him hotter for some reason. He does have a charming and handsome smile as described.

Since I named one of my children after Bran, it goes without saying that I loved him. He is youthfully beautiful and innocent all at once and once I realized they would be ending the premiere with his fall, I knew this series would do well.

That scene is the chapter of the book that took hold of me and refused to let go for four massively thick books. When Jamie pushed him out of that window, I was a goner, and I know that people who haven’t read the books probably sat up straight with a disbelieving “WHAT” coming from their lips. It sets the tone for the series and lets you know that yes, this story means serious business.

The sets were amazing, the costumes top notch, the score was beautiful, and the acting and interaction perfect. I laughed at Sansa’s scolding of Arya during Robert’s arrival and teared up as Robert bemoaned Lyanna’s tomb. It spoke of a different life for all of these characters and I just couldn’t help but feel the sorrow in Robert’s voice and the repercussions Lyanna’s death ultimately had on everyone.

I found myself annoying the shit out of my husband by being a know-it-all about who was who from the book and agonizing over the little things like it not snowing during the direwolf discovery scene and the way Jamie delivered his infamous line. I hated that Dany’s consummation was done on the ocean shore rather than on a grassy plain, but I suppose this doesn’t matter since at that point, the Dothraki ways haven’t really been explained. At first, I was upset that it was portrayed as almost a rape, but have decided that this isn’t drifting all that far from the book because it’s not like Dany doesn’t get fucked like an animal after that first night anyway.

I think as the weeks go on I have to let go of the book and just enjoy the show.

But can this show be truly enjoyed by sympathetic fans of the book series? During the feast Mr. Pikko blurted out that he wasn’t enjoying the show at all. At first I thought he was smoking crack over on his part of the couch, but turns out all he meant was that the show was depressing him. And he’s right. Knowing what happens to all of them, you just can’t help but want to scream at your television that they should all just stay in Winterfell.

And yet, there wouldn’t be a story if they did.