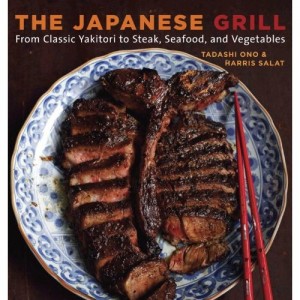 This is Part 2 of my review series on The Japanese Grill: From Classic Yakitori to Steak, Seafood, and Vegetables

, which begins to explore the recipes in the book and evaluates taste, accuracy, and difficulty level.

For this review, I chose to cook two dishes using two master recipes in the book. The first was the Classic Yakitori with the master recipe for Classic Yakitori Sauce, which in my opinion, is actually a rather involved recipe, but I wanted to try it out accurately in order to do a good review.

Making Classic Yakitori Chicken and Classic Yakitori Sauce go hand in hand because you use whole chickens for your chicken yakitori meat and then use the carcass to make the yakitori sauce. The step by step directions for removing the meat from the chicken were very good and I was able to do it without too much difficulty, though it was time consuming.

Next, I was to broil the bones for five minutes on each side in the oven. I then transferred the bones to a stockpot and added mirin, soy sauce, sake, water, and brown sugar. You’re then to simmer it for at least one hour until it becomes nice and glossy, but it took almost two hours for this to happen for my sauce.

Next, you prepare the skewers of meat by cutting the chicken meat into small pieces and piercing them with bamboo skewers. You lightly salt them and then you’re ready to grill. This was where I was a little confused, as no marination is done. 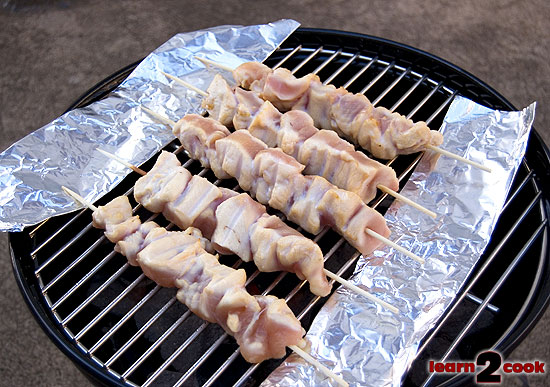 at Home Depot for this and used the book’s described method of foil to protect the uncovered skewer ends. You cook the skewers for about six minutes before starting to brush on the yakitori sauce. 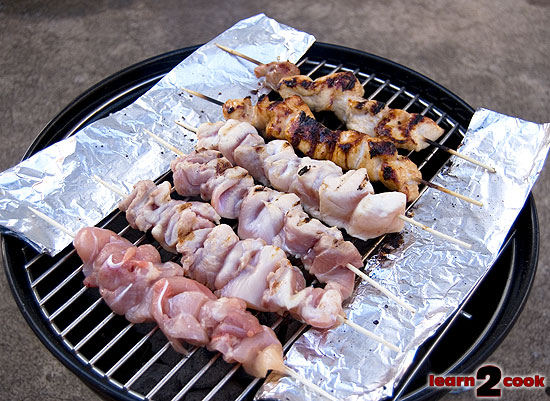 You can see the two sticks on the end are from the first batch and have already been brushed with sauce as I turned them. The kids began to eat them as they were done and they loved them, though I admit the novelty of eating outside off of sticks may have had a lot to do with it. 🙂

They were good for sure, but I couldn’t help but think that it should have had a bit more taste. Afterward, I realized that I’d forgotten one step from the recipe, which was to spoon sauce on top after they were on the platter. I’d definitely cook this one again. 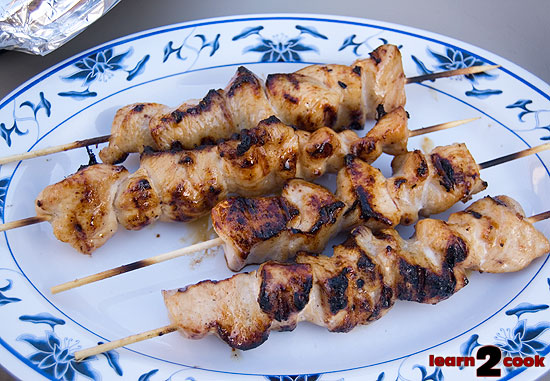 Looks great huh? I think it would have looked better if I’d remembered to put the sauce on.

The other recipe I tried is the one on the cover of the book, Porterhouse with Garlic-Soy Sauce Marinade, though I used ribeye instead of porterhouse because Costco didn’t have any. Both were really thick cuts of steak, so I figured it was ok. Besides, the Garlic-Soy Sauce part was a master recipe, so you’re supposed to be able to use it with anything.

The marinade itself is very simple, consisting of soy sauce, garlic, olive oil, and black pepper. The steak recipe simply calls for two steaks and 3/4 cup of the marinade and you marinate them for only 10 minutes. I ended up marinating them for like 30 because they were sitting there while I grilled the chicken. 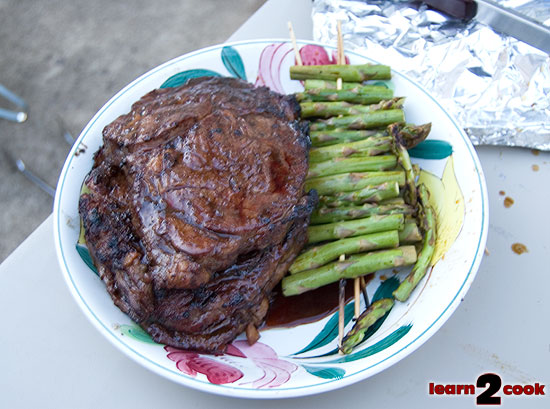 I followed the grilling directions in the book and they came out looking fantastic. We took the meat inside to eat.

The steak was sadly very disappointing to me and Mr. Pikko admitted the same, though he made sure to tell me that he usually likes everything I cook. It just wasn’t all that tasty. It seriously needed salt for some reason, though the recipe did not state to salt the steaks, so I didn’t.

So far, I’m a bit underwhelmed with what I’ve tried from the book. The Classic Yakitori sauce, though good, took me like 3 hours to make. That’s an awful lot of work compared to just going out and buying some store sauce. The Garlic Soy Sauce Marinade didn’t deliver and I felt like I’d almost wasted 20 bucks worth of meat.

The other bit I’m disappointed in is their master recipe for Yuzu Kosho Marinade, which calls for red yuzu kosho. I cannot find this product anywhere on this island. I have been to Nijiya Market, Marukai Marketplace, Foodland, and Safeway and none of these stores carry red yuzu kosho. The two Japanese markets carried the green yuzu kosho, but they hadn’t even heard of red.

bottle, but it’s freaking nine dollars plus shipping. Since I have the green yuzu kosho bottle, I know that it’s a dinky little bottle that you can fit in the palm of your hand. I ain’t shelling out 18 bucks for that. Very disappointing since I really wanted to try the Yuzu Kosho Scallops and Yuzu Kosho Shrimp just like the book intends.

Hawaii has a heavy Japanese population and usually I can find almost anything at those two Japanese markets because, well, they’re Japanese markets. If I can’t find it, I can’t imagine other people being able to find it either, unless you’re in the area the authors live in. To me, it doesn’t make much sense to put such a unique and hard to find ingredient in your cookbook as a master recipe. In the end though, I will simply try the recipe with green yuzu kosho and see how that goes.

My shiso plant is almost a bush now, so I think I can try out the Salmon with Shiso Pesto recipe as part of my next review of this book.

Disclosure: This book was sent to be for review by Ten Speed Press. I was not paid to write this review.