This post has been imported from my old cooking blog Learn 2 Cook.

This Easter we’re having a big party and egg hunt so I’ve planned to make, among other things, Easter themed cupcakes. With my new love for fondant still fresh on the brain, I wanted to go with cupcakes topped with cute fondant figures. I started off with a sketch and plan for four different cupcakes: a chick in an egg, a bunny, a nest of eggs, and a sheep. I ended up adding a piggy and bumblebee. 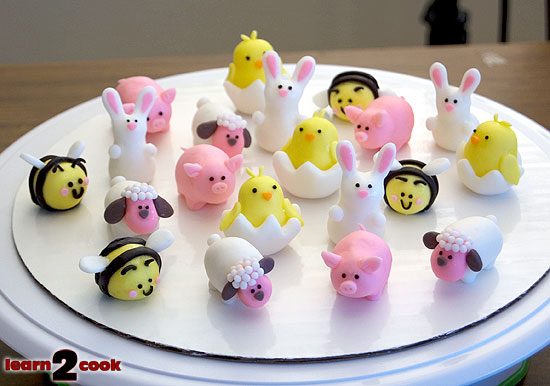 Here’s the final result of like four hours of work. I’m very happy with the results! Read on to find out how I made all of them. Warning: I have ugly fingers.

I started with the chick in the eggshell. First thing you do is shape the eggshell by hand, pinching the sides to make the cracks. 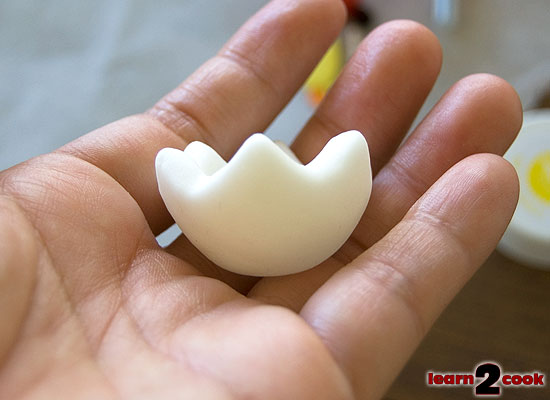 Color some white fondant yellow and take a piece off. Roll the piece out very thin and then use either a teardrop cutter or a pinched bubble tea straw to cut out 8 wings. Place them on the side. Pinch off a small amount for the top feathers. Blend the remaining fondant back into the rest of the yellow and then divide it in half, then half again. This should leave you with four equal amounts of yellow fondant for the chicks.

Roll one ball in your hands until smooth, then start to pinch out a small shape of a head. 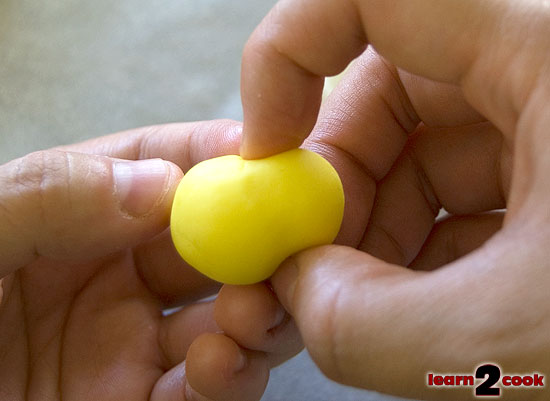 Once you have your basic chick shape, dab the bottom of it with some piping gel and then place it into the eggshell. Use a toothpick to apply the piping gel.

Next, apply more gel to the sides and apply the wings. 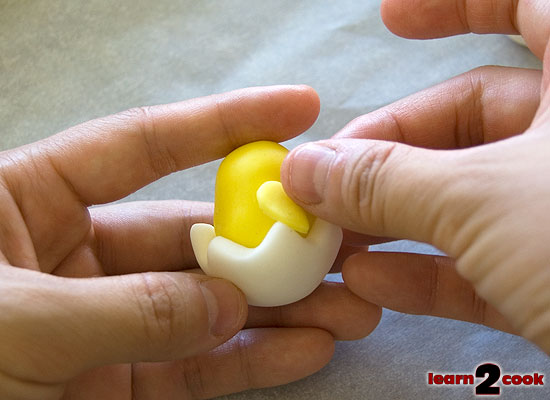 Color a small amount of fondant orange and roll it out very thinly. Cut off a piece of coffee straw and pinch it into a triangle shape. This will be used to cut the beaks and noses for all the animals. Cut four beaks for the chicks and apply with piping gel. 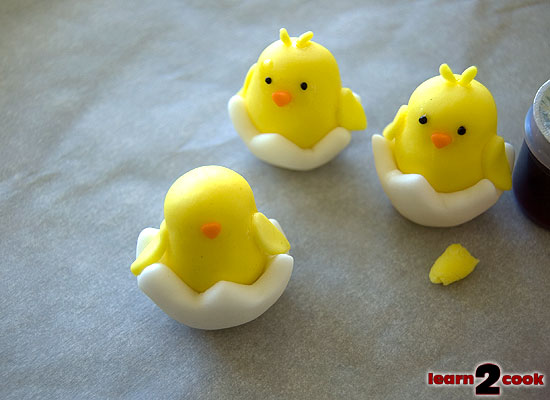 Next, poke two holes into the top of the chick with a toothpick. 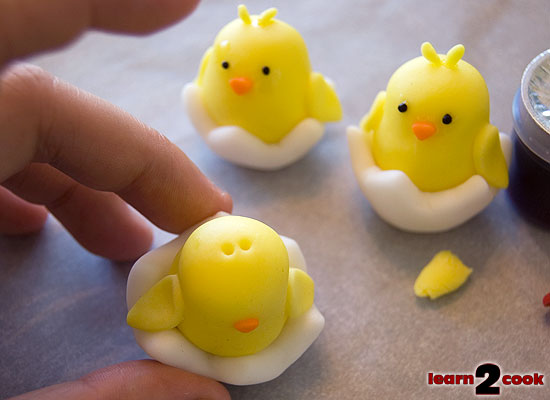 Dab some piping gel into the holes, then roll tiny little sticks out of yellow using the bit you’d set aside. Poke them into the holes and arrange them nicely. 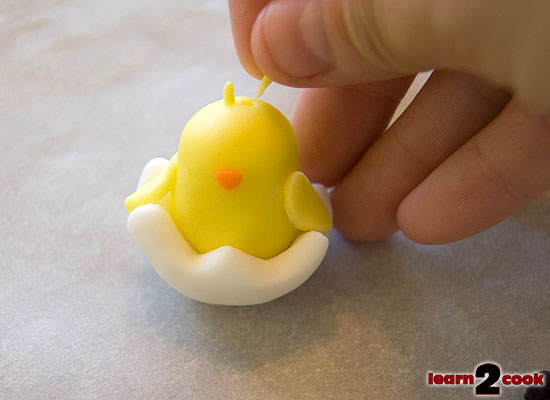 Next, roll tiny amounts of black fondant and apply with more gel. Alternatively, you could use nonpareils or simply dot on food coloring with a toothpick. I use toothpicks to apply everything. 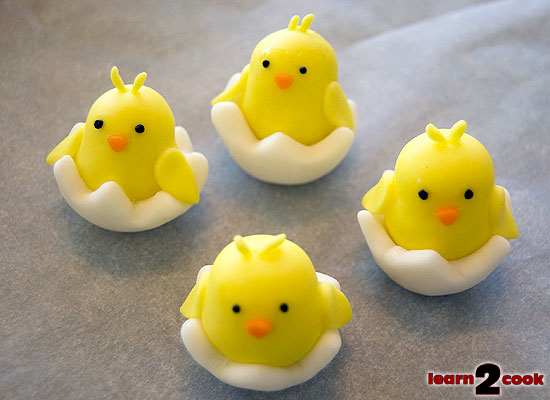 Color some fondant pink and then divide into four equal parts. You won’t need much. Roll it into a pear shape for the head. Color more fondant gray or purple and roll into ear shapes. If you want, use the teardrop cutter to make them. Apply with piping gel. 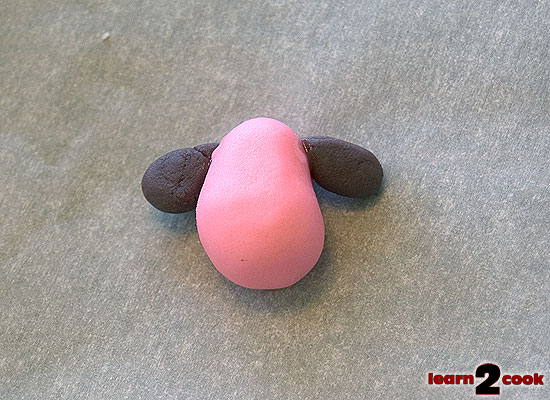 Next, we’ll need to make some little balls. Roll out a piece of white fondant very thin and then using the still-round end of the coffee straw, cut out lots of little circles. This will give you an even amount of fondant to roll into little balls. 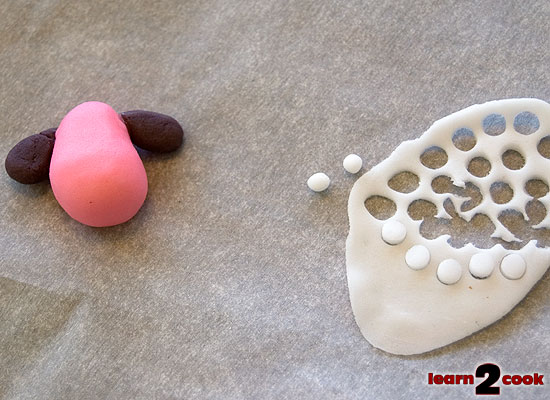 Now you attach the head to the body. Divide some white fondant into fourths and then roll into sheep bodies. Pinch the bottoms to get four legs, then stand it on parchment paper. This will flatten the feet for you. Press an indentation into the front of the body with your finger and then apply the head with piping gel. 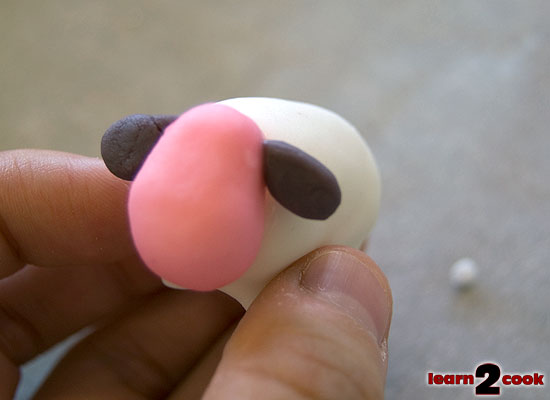 The head will probably slide down a bit, so you might want to prop it up with a piece of fondant until it’s fully dried. 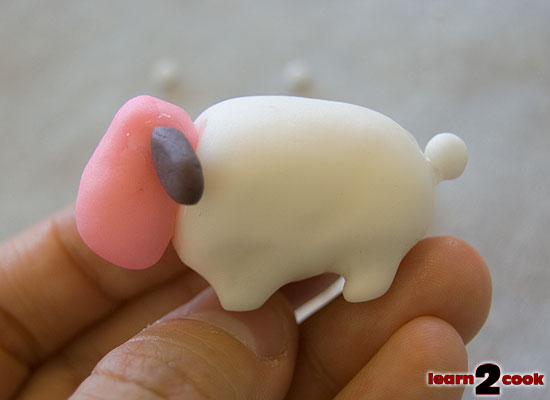 Apply piping gel to the top of the sheep’s head and then start to apply the tiny balls. This will be the wool on top of their head. 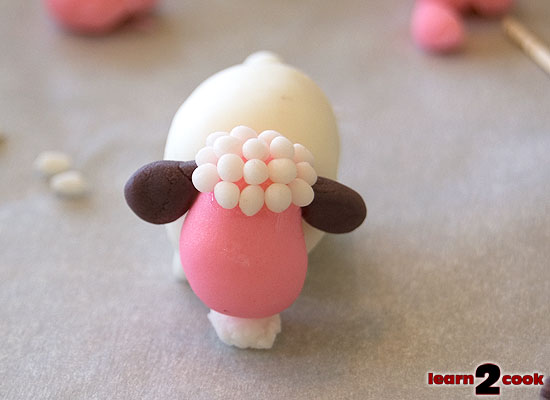 Using the same piece of straw you used for the chick beaks, cut out sheep noses from the same fondant used for the ears. Add eyes. 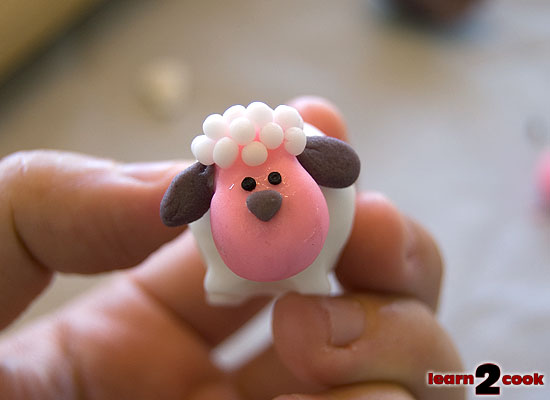 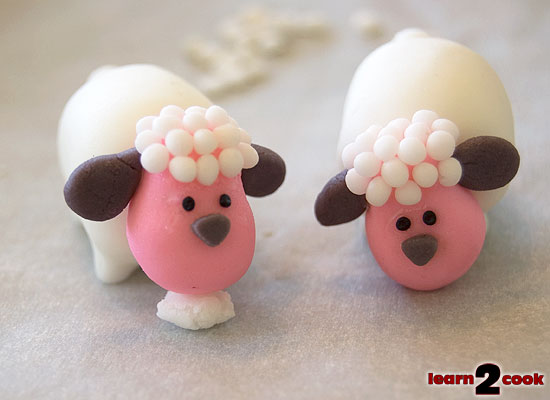 Next up, the bunnies.

There isn’t much to say for these except that you take white fondant and shape it into a bunny shape with tall ears. I forgot to divide a ball equally, so all my bunnies are different sizes… 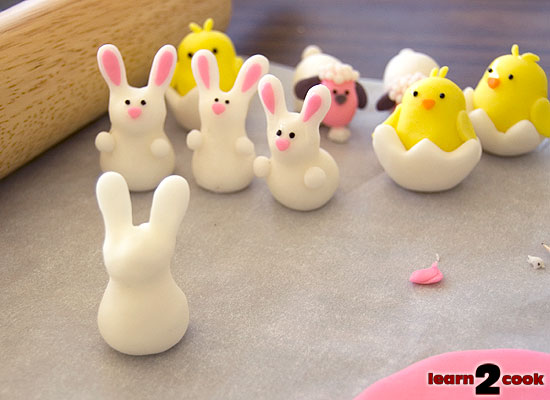 Roll tiny pieces of pink into the inner ear shape and apply with piping gel. 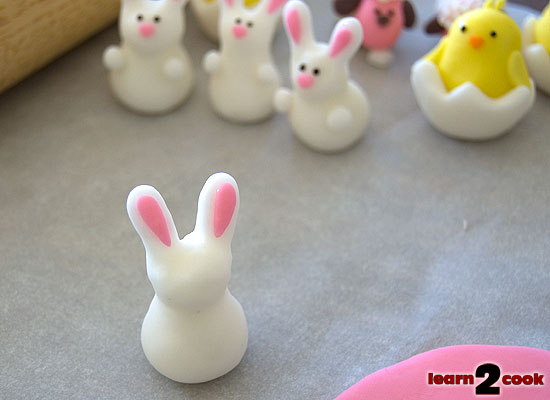 Use that piece of straw again and cut out pink noses. Apply, along with eyes.

Roll little balls and apply them to the front as arms. 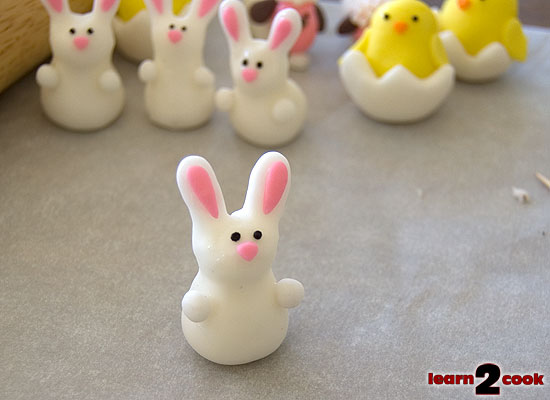 Last of all, apply a little bunny tail. 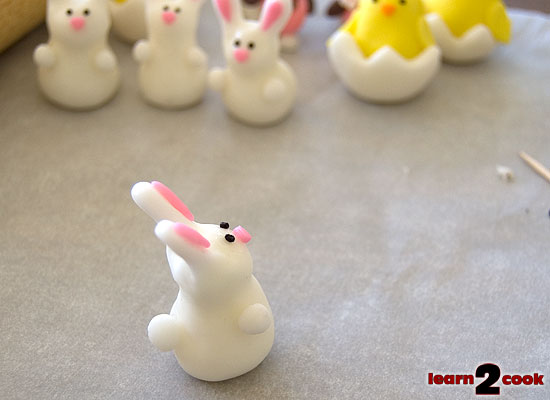 Here are all the characters so far! 😀 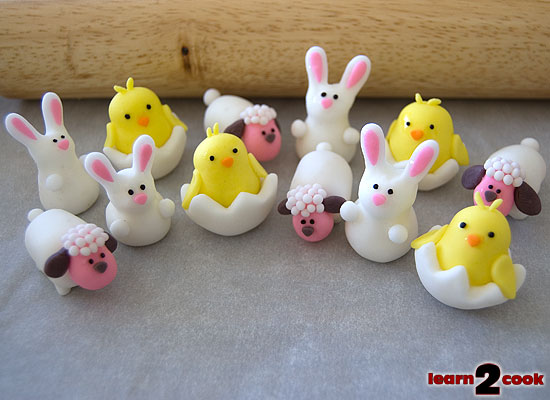 Next up, piggy time!

Color more pink fondant and flatten a portion of it and cut out 8 teardrops for ears. Add it back into the fondant and divide into fourths. Shape into a pig’s body and pinch out little legs, just like the sheep. 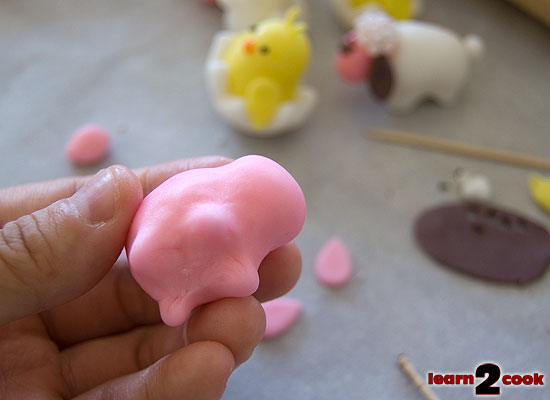 Pinch off little bits from the piggies and flatten and cut with a pinched drinking straw into little tiny ovals. These will be their noses. To make the nostrils, simply make two holes with a toothpick. Apply to the head. 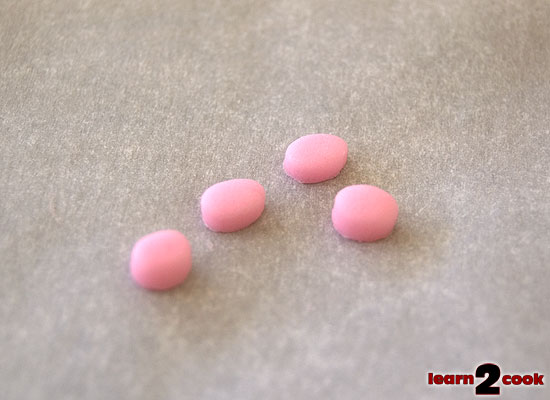 To make the ears, pinch the teardrops and tear off about half. Shape them into little ears and apply along with eyes. 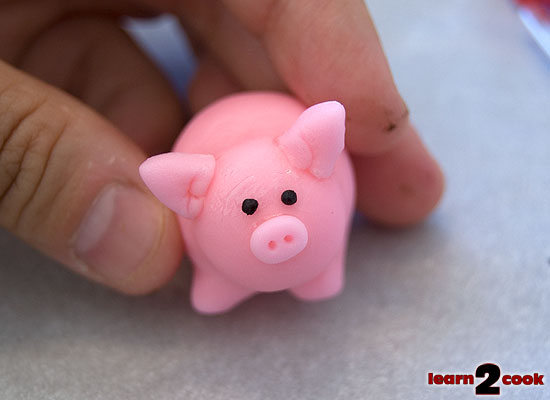 Poke a hole into the back of the pig and just like the chick feathers, insert a little “stick” of pink fondant for a tail. Use a toothpick to curl it a little. 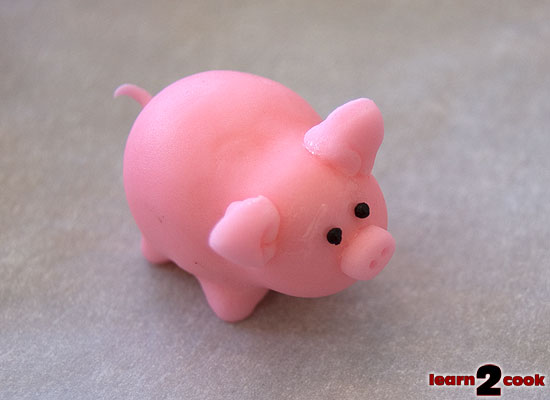 Here they are! All happy together! 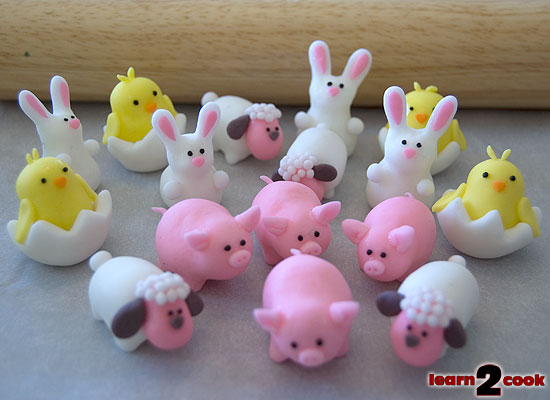 Unfortunately, I was pretty sick of taking pictures at this point… I only have one single shot of it. 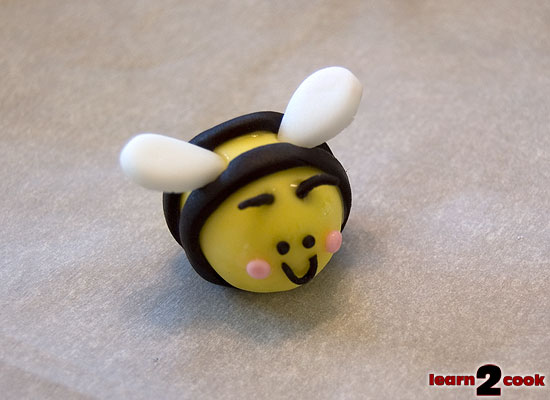 I rolled four equal balls of yellow into oval shapes, then made their ends pointy for stingers. I cut white teardrops for wings and added black stripes cut with a knife. I inserted the antenna like the chick feathers and added eyes and a smiley mouth. As a finishing touch, I applied little pink balls to their cheeks and pressed it flat with a toothpick.

Here they all are again, standing on top of my Wilton Rotating Cake Stand

. They’ll go on top cupcakes I’ll be baking tomorrow. I have to admit, I’m scared of the whole buttercream frosting thing. Usually it’s disastrous for me. We’ll see… The bird’s nest will just be frosting and Robin Eggs I bought at Walmart. I’ll post the final cupcake results tomorrow. I figured these how-to photos were more than enough for one blog post!

I hope you’ve enjoyed the tutorial! See how to add these to cupcakes here. Have a Happy Easter!

Save up to 50% off Easter items at Williams-Sonoma!