Was there ever an hour of television so full of agonizing farewells as last week’s episode of Game of Thrones? Jon in particular had a harsh set of goodbyes to give. From his gifting of Needle to his plea to Bran to wake up to Ned’s quivering face as Jon asked about his mother, it was almost too much to bear.

Before I get to the rest of the episode, I have to give props to the producers for their casual editing of the opening sequence. If you weren’t paying attention, the growing maps changed and this week we saw no Pentos, but Vaes Dothrak instead. I was totally in awe and my husband told me to stop nerding out on him.

I really have to applaud the writers for keeping so true to the book. They’ve succeeded in bringing word-for-word conversations from the pages of Game of Thrones to the screen in a brilliant fashion. What non-book fans may not know is that Tyrion’s breakfast order of two tiny fish, bread, dark beer, and blackened bacon was practically read from the book itself. I’d just read it last week while searching for possible food topics for Fictional Food. It’s been a real treat to watch them bring actual scenes to life and it’s a true credit to George RR Martin that his conversations are so well written that they translate perfectly to screen. We did get a brief glimpse of Myrcella and Tommen, which I thought was cute.

I was a bit surprised at the added scene of Catelyn and Cersei, as this was something that was not in the book, but is still possible given the history we learn of Cersei later and so I felt it was a clever piece of adaptation to her character. If you were moved by her, enjoy it now. It’ll be the last time in a long time you don’t see her as anything but a stone cold bitch.

Tyrion’s character really got a lot of great development time this episode. His conversation with Jon about books (another lifted from the pages), though brief, showed him to be a man of wits in light of his short stature and ridiculed looks. We also got a glimpse of the long road ahead for Jon Snow.

Meanwhile, on the Kingsroad, the storyline progressed quickly. Arya is found practicing with wooden swords with the butcher’s boy Micah and the appropriately snotty looking prick Joffrey shows his true side. After an attack by Nymeria and an appropriately stupid whining session from Sansa, Joffrey is wounded and Arya flees into the forest with her direwolf. Using rocks to chase her off, Arya saves her wolf from harm only to find that it ultimately results in the death of Lady, who is utterly blameless.

Bran and Catelyn are attacked in his sickroom by a man wielding a blade made from Valyrian steel and they are rescued by Bran’s yet unnamed direwolf. This leads Catelyn to her journey to King’s Landing.

Over the sea, we see Dany and are introduced (yes!!!) to her handmaids Irri, Jiqui, and Doreah. I was tickled to finally hear them say their infamous simple lines:

Doreah began her sexual lessons, which I’m sure made all the male viewers goggle, since Doreah is sizzling hot. I’m glad they’re already working on Dany and Drogo, as their relationship is so important for her character’s growth.

The one failure of the episode was that I don’t feel like they’d built up the importance of the direwolves enough before Lady’s death. I think this could have been strengthened simply by showing Catelyn insisting that the direwolf be with Bran at all times from that point on. We haven’t even seen Ghost, Shaggydog, or Grey Wind since they were found, which could have also helped to build up their importance. Hopefully in the coming weeks we see more of them, but with two already out of the picture, it seems like it’s getting late to do that. 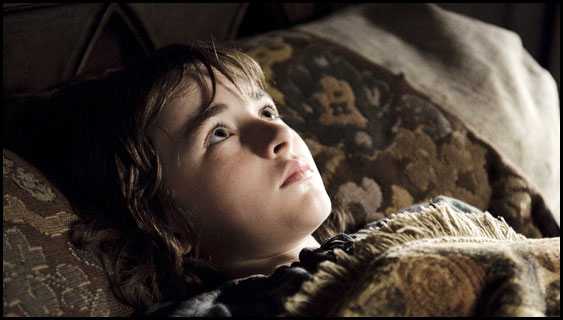 Since they ended the episode with Bran waking up, next week looks like it’ll be another gutwrenching affair. Imagine being 8 and you wake up a cripple, your parents are gone, your brother Jon is gone, your two sisters are gone, many of the castle staff are gone. It’s just one of many brutal things that will happen this season. The appearance of The Hound with a dead Micah over his horse says that loud and clear.