One of the downsides of Redbox is that with DVD rentals being so dirt cheap, you kind of feel obligated to rent something once you start browsing. After all, it’s only a dollar, right? What doesn’t get taken into account is the time you waste when you rent a real stinker of a movie. Such was the case with Case 39

, which started out with potential, but eventually became your standard movie about an evil but innocent looking kid. Wildly original!

I don’t mean this literally, since admittedly I didn’t see some of these things before, but they were mostly so cheesy and lame that I just couldn’t take the movie seriously in the slightest way.

), a ten year-old girl who is showing signs of problems at home. The problem is immediately obvious, as her two parents are just about the creepiest people alive and that creepy feeling is reinforced with the one truly horrifying scene in which Emily receives a call from Lilith and arrives just in time to find her parents trying to kill her by burning her in their oven. 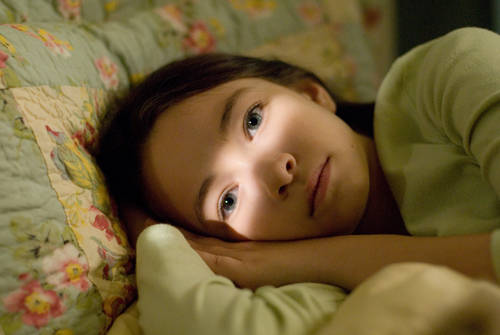 After mom and dad get shipped off to the booby hatch, Emily is swayed by the girl’s sweet demeanor and invites her to live in her home officially. From here, things start to go downhill as people around Emily begin to die mysteriously after scratchy phone calls and finally jumps the shark when maybe-boyfriend Doug (what Bradley Cooper was thinking when he took this role is beyond me) gets a call and snaps his own neck trying to get away from bees that are crawling out from his orifices. Yes, you read that right, he snaps his own neck. I ceased to care about the movie after this point.

To her credit, Jodelle Ferland is amazingly creepy and if demon children were a new concept for movies I would certainly have thought this was better. The fact is though, that evil children movies have been done over and over and this one didn’t really seem to bring anything new to the table.

Anyway, Emily begins to put two and two together and goes back to see the crazy parents and finds out that they were trying to kill her because people were dying around them as well. Aside from the oven scene in the beginning, there’s nothing else in this movie that is truly terrifying. Sure, the girl is creepy in her own cute way, but I thought this was going to be a much better horror movie than it was. The ending was meh and I found that I was just glad the movie was over. Spare yourself some time and don’t bother even renting this. If you’re looking for a good evil child movie, go with Orphan

Get 20% off $25 in movie tickets when you use your Visa Signature card.