Episode 4 of HBO’s Game of Thrones began with the introduction of a new “character” in the form of Bran’s three-eyed crow. For book fans, this is the start of Bran’s journey. For show fans, I’m sure the damn bird was just creepy as hell.

Moping in bed and stuck in the room with Old Nan as usual, Bran refuses to go when Theon arrives to tell him he has a visitor. Not that he has much choice, as Hodor arrives to carry him downstairs. I can’t express how happy I was to finally see him get to deliver a line.

Oh, wait. That’s his only line. That poor actor.

Once in the hall, we see that the visitor is in fact Tyrion, just returned from the Wall to visit Bran on his way to King’s Landing. Despite the chilly reception he gets from Robb, Tyrion offers Maester Luwin the plans for a special saddle that will enable Bran to ride a horse. Feeling sheepish for being so aggro, Robb offers the hospitality of Winterfell to Tyrion, who promptly refuses, choosing instead to spend the night at a whorehouse.

From here we see an added scene between Tyrion and Theon Greyjoy, one of the many necessary to fill in the gaps of history and character background that books can so easily handle, but shows cannot.

I think what I liked most about this scene was it very subtly revealed just how perceptive Tyrion Lannister is, sharp tongue though he may have.

We’re introduced to the cowardly Samwell Tarly, though I have to admit I am still complaining to myself that he’s simply not fat enough. Jon described him as the fattest man he’d ever seen and said that his fat oozed out of his armor when he put it on. The Samwell we get to see simply doesn’t look like I’d imagined, which was something like the kid from Indiana Jones and the Last Crusade.

Big cheeks that flushed easily when embarrassed and a rounder body. My hubby insists that Samwell in the show is probably really fat considering everyone else, but I’d definitely say that Robert is still the fattest man Jon’s seen so far.

Across the sea, Khal Drogo and his khalasar arrive at the holy city of Vaes Dothrak and Viserys is not impressed by it. Frankly, I wasn’t either. It looked like a village set up by the khalasar as they progressed through. I’d expected a vast city with the temple being in the mountainside, but I suppose those are the kinds of sets that break series’ budgets. They added in a scene with Viserys and Doreah to both show what a total prick he is and to give background on the dragons. Sadly, even with this scene I don’t think the point has been pushed home enough. A flashback might have been cool.

Back in King’s Landing, Ned is starting to dig into what Jon Arryn was doing and borrows the great tome on the lineages of the great houses of the Seven Kingdoms from Grand Maester Pycelle. The Maester gives him a key piece of information with Jon’s last words, “The seed is strong.” Not to rag on an old, dying man, but you’d think he’d mutter something else instead of a puzzling line like, “The King has no true heir.” or “The Queen is an incestuous skank.” But I guess then there’d be no show. Still, just sayin’. 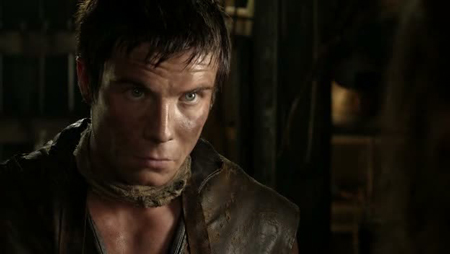 After going around with Jory, we’re treated to the introduction of a new face: Gendry. I’d pictured him much taller and bigger, but I still liked seeing him. Jory is sent to deliver a message to the king, but instead he encounters a shamed and seething Jaime Lannister who is made to stand guard outside the door as the King “shames his sister” with other women very loudly. They exchange a brief conversation and we get to see Jaime’s face light up as the talk changes to battle; you can see quite plainly how much fighting means to him. Watching him stand guard was sad and I couldn’t help feeling like they were painting him in a sympathetic light much sooner than in the books. My hubby says I’m just blinded by what I know of the future though and all anyone else knows is that he pushed a little boy out a window.

The story then shifts back to the Wall, where Ser Asshole Thorne is sending everyone against Samwell after dubbing him with the nickname Ser Piggy. Unable to stand back and watch any more, Jon tells his new friends that they’re going to protect Sam as he’s going to be one of their brothers. Everyone agrees except for Rast. Later that night, we finally get to see Ghost, as he helps Jon threaten him to not harm Sam.

Later, as Jon and Samwell clean the tables in the eating hall, Thorne comes in to give them a grumpy speech about how they don’t know what cold is. He describes a gruesome ranging in which they had to start eating their own brothers to stay alive and how he lost some of his fingers to the cold. Brutal.

At the Hand’s tourney, the first joust ends in bloodshed as we get our first glimpse at the treacherous Ser Gregor Clegane driving a lance through the throat of newly knighted Ser Hugh, Jon Arryn’s former squire. During this scene, Littlefinger does a little voiceover bit as he whispers the story of the Hound’s face into Sansa’s ear. I wasn’t that happy that they took this away from Sandor as I felt that did a lot to paint him in a different light as setup for next season. I suppose that’s needed early on to explain his face, but I always liked that Martin kept that a secret until much later.

The episode ends with Tyrion’s capture at the Inn at the Crossroads, which sets in motion the turmoil of the series. It can be easy to forget, but Tyrion is brother to the Queen and to the Kingslayer, Jamie Lannister. While the Queen may have no love for her brother, she knows a bold political move when she sees one.