Thought you were having trouble keeping your main characters straight in Game of Thrones? Time to start taking notes because last week’s episode of Game of Thrones introduced a slew of new characters that seem to be unimportant, but will eventually play vital roles in the storyline down the road. Here are 13 characters that made their first appearance in Episode 03, Lord Snow, that you’ll need to remember.

Actor: Peter Vaughan
Role: Maester for the Night’s Watch at Castle Black
Where you saw him: The old blind man who pleads with Tyrion about how shorthanded they are at The Wall.
Why he’s important: Maesters in general play a vital role at all the castles in the Westeros world. To go into detail about why he’s important is too much of a spoiler at this point, but just remember to pay attention to him.

Actor: Owen Teale
Role: Master-at-Arms for the Night’s Watch at Castle Black
Where you saw him: Anxious to make a mockery of Jon Snow, he gives him the nickname Lord Snow and sends recruit after recruit after Jon, knowing he has a tactical advantage.
Why he’s important: Being that he has an intense hatred for Jon, he’s still responsible for readying him for the Night’s Watch, therefore he plays a vital role in Jon’s character growth in both good ways and bad. He’ll become a bigger player in later seasons. 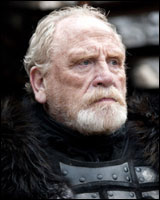 Nickname: The Old Bear
Actor: James Cosmo
Role: Lord Commander of the Night’s Watch
Where you saw him: He watches Jon battle the recruits from a building with Tyrion and made a plea along with Maester Aemon for help from the King with manning the Wall.
Why he’s important: The whole story begins with the supernatural beings called the “white walkers”. Historically, the Wall was built to defend the Seven Kingdoms from them, so being their commander, he keeps the realm safe from harm.

Actor: Francis Magee
Role: Recruiter for the Night’s Watch
Where you saw him: Drinking with Tyrion in the mess hall at Castle Black.
Why he’s important: He stated that he’d be traveling south to King’s Landing with Tyrion to find more recruits for the Wall. To say any more will be too spoilerish.

Actors: Josef Altin (Pyp) and Mark Stanley (Grenn)
Role: Recruits for the Night’s Watch
Where you saw them: They tried to kill Jon in the armory for humiliating them during practice. Tyrion gives a brief back story on them both.
Why they’re important: As is obvious in plotlines, these two guys will undoubtedly become friends of Jon Snow in the future.

Actor: Gethin Anthony
Role: Member of the King’s Council and the King’s younger brother
Where you saw him: He is in attendance at the first King’s Council meeting that Ned Stark attends.
Why he’s important: Being the brother of the king and a member of the council, he has significant input on the business of the realm. He becomes a more prominent character next season.

Nickname: Barristan the Bold
Actor: Ian McElhinney
Role: Leader of the Kingsguard
Where you saw him: He’s the old man politely trading war stories with a drunk and belligerent King Robert.
Why he’s important: Depending on the adaptation of the storyline, he actually won’t be important until much further down the line. However, he’s an old, noble, and respected knight with an impressive battle history. In short, he’s a badass you don’t mess with.

Actor: Eugene Simon
Role: The King’s Squire and cousin to Cersei and Jaime Lannister
Where you saw him: He was the young man Robert belittled over his wine skin being empty.
Why he’s important: Being a Lannister automatically makes him important, but he plays a particularly vital role later on in the season.

Actor: Julian Glover
Role: Maester at King’s Landing, serving the throne
Where you saw him: The old man sitting at the King’s council meeting with Ned Stark. He delivers the message to Ned about Bran.
Why he’s important: As previously mentioned, maesters play vital roles in the Seven Kingdoms. Note that he expected to be privvy to Ned’s message from Winterfell, thus exposing him as a nosy old geezer.

Nickname: Littlefinger
Actor: Aidan Gillen
Role: Master of Coin for the King
Where you saw him: He was that creepy guy that got inappropriately stalkerish about Catelyn when Ned arrived at the King’s Council meeting.
Why he’s important: As member of the council and Master of Coin, he controls the monetary aspect of the political game in King’s Landing as well as who is loyal to who, since money speaks volumes.

Nickname: The Spider
Actor: Conleth Hill
Role: Member of the King’s Council
Where you saw him: He appears first at the council meeting and again at the whorehouse when Catelyn arrives in King’s Landing.
Why he’s important: Equivalent to the head of the CIA, Varys is the master of spies and seems to know everything that goes on in King’s Landing. A guy like that is one to have on your side and one to watch out for.

Actor: Miltos Yeromelou
Role: Arya’s “Dancing” Teacher
Where you saw him: He’s the oddball man with the fro that Ned hires to teach Arya how to use Needle.
Why he’s important: Because he teaches Arya how to fight! Any more than that offers too many spoilers. Just know that he teaches Arya a lot.

With that out of the way, the storyline in Lord Snow seemed a bit muddled and disjointed at times, but still moved us along very quickly. With the introduction of so many new characters it becomes difficult to remember everyone, but pretty much all of them deserve remembering.

Up at the Wall, Jon finds himself singled out by Ser Allister Thorne, the master-at-arms of Castle Black, where Jon is training to join the Night’s Watch. After humiliating the entire troop of recruits, Jon finds himself nearly getting his throat slit, if not for the interference of Tyrion Lannister. Benjen Stark leaves Jon behind to embark on a ranging that will have him out for nearly two months.

We meet the Old Bear, Yoren, Pip, and Grenn. I’m a bit surprised we still have not seen anything of Ghost. Perhaps next week?

At Winterfell, we get to see lovable character Old Nan, who tells her scary stories to Bran just like in the book. Bran struggles with the fact that he’ll never walk again and tells his brother Robb that he wishes he was dead. He doesn’t seem to remember anything of what he saw.

Down in King’s Landing, Jaime and Ned have a tense moment in a scene new to the story but still gave a good amount of accurate history. It definitely highlighted the more insecure parts of Ser Jaime’s personality and served to focus on Ned’s intense belief in loyalty and trust. At the King’s Council, we meet four key players: Renly Baratheon, Grand Maester Pycelle, Lord Baelish, and Varys.

Catelyn arrives with Ser Rodrick and they are approached immediately by the City Watch and taken to a whorehouse belonging to Petyr, which subjects him to Catelyn’s rage. There he reveals that the knife used in Bran’s attempted murder was his, but that he lost it in a bet to Tyrion Lannister.

Meanwhile, Robert shows us the side of him that makes him a terrible king, insulting those around him and paying particular malicious attention to his wife’s family, Lancel and Jaime. Being the king, he doesn’t need to care about what they think about what he says to them, but it doesn’t paint him in a very good way. It was nice seeing Ser Barristan make an appearance anyway.

On the Lannister front, Cersei continues to worry about what Bran knows and Jaime reassures her that the boy remembers nothing. Joffrey further reveals himself to be a spoiled gutless brat coddled by his mother.

Finally, we see Arya get the important talk from Ned about their presence in King’s Landing and the need to stick together with family, no matter their differences. He discovers her practicing with Needle and assures her that Micah’s death was not her fault at all. The next day, we meet the lovable Syrio Forel, who begins Arya’s “water dancing” lessons.

Across the sea, we see Daenerys emerge as khaleesi and watch her embrace her relationship with Khal Drogo and finds out that she is pregnant with his child, one that she knows is a son. Upon hearing the news, Ser Jorah immediately rides for Qohor, bringing his motives into question.