Having recently subscribed to HBO

and Showtime to watch Game of Thrones, I taped the movie Orphan

one day out of curiosity.

It took me a while to get to it, as I knew it was an evil child movie and I tend to find those boring and outdone, especially after I’d just watched the terrible Case 39. Really, that was an awful, awful movie.

There are of course the evil child classics that remain untouched as the masters of child horror, such as The Exorcist

. Orphan doesn’t quite touch that level, but if you ask me, it came pretty damn close without really jumping the shark.

The movie stars Vera Farmiga and Peter Sarsgaard as Kate and John Coleman, who have been going through a rough patch in their marriage after Kate’s miscarriage and subsequent battle with alcoholism. However, they’ve made it though and to help heal wounds and do something good, they decide to adopt a child to help fill the void of their lost daughter.

They travel to the St. Marina Orphanage where they meet charming young Esther, who is upstairs painting while the other children have a party. She’s a very pretty child with grace, artistic talent, and an exotic Russian accent. The Colemans are immediately taken with her and the nun in charge of the orphanage, Sister Abigail (played by CCH Pounder), has nothing but glowing things to say about her. The Colemans take her home to meet their son Daniel and daughter Max, who has been deaf since birth.

Things seem to be going well and Esther seems to be adjusting nicely despite the cold shoulder from her new brother. Then she starts school and a punky girl picks on her. She grabs her book in the hall and Esther goes completely apeshit in front of everyone. Yeah, something’s definitely freaky with this kid.

Eventually, Kate begins to smell something rotten in the state of adoption and she tries to talk to John about it, but he’s predictably blind to what she sees and says that returning her to the orphanage is out of the question. Kate calls in Sister Abigail and of course now the woman has lots to say about how she’s had a funny feeling about this girl! She promises to look into her original orphanage more and leaves.

Sadly, Esther has other plans for her and after throwing new little sister Max in front of the nun’s car, takes a freaking hammer to her head and bashes her skull in right in front of little Max. I don’t know how they filmed this stuff with this little girl but man was I cringing in terror over the cold, calculating look on Esther’s face. While Sister Abigail is missing, Kate starts to dig on her own and makes a call to a Sarne Institute in Russia based on a note she saw in Esther’s little book. She only speaks to an orderly and inquires about any children that might have been born to a patient and doesn’t really get anywhere, but she emails a photo of Esther to the main doctor.

Things continue to escalate, with Esther trying to kill Max by releasing the parking brake of the car while Max is in it at the top of a hill. She tries to burn Daniel to death in his treehouse. Kate loses it and goes ballistic on Esther’s face (yeah!!!) at the hospital where Daniel is and she’s then sedated and placed in a room at the hospital while John takes Max and Esther home. This is where the movie enters Mega Creepytown. 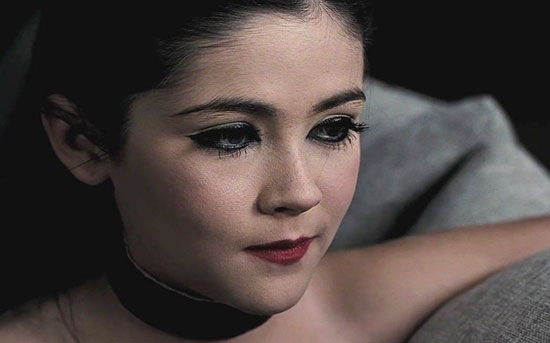 Is there anything more wrong than a 10 year old girl dressed up like a whore? Sure, she looks great, but god is this a disturbing image. It doesn’t seem to be made any better by the revealing of the eventual twist because you know in the back of your mind that this girl really is 10 years old, acting as though she’s seducing a man in his 40s.

While she’s in the hospital, Kate gets a call from the doctor in Russia, who informs her that Esther wasn’t a child of a patient, she was a patient. She suffers from a dwarf condition which makes her appear to be a child when actually she’s a grown woman in her thirties, prone to violence, and a known murderer. Kate rushes home only to find that she’s too late: John lays on the ground dead, stabbed with a knife. Max is hiding in the greenhouse while Esther stalks her.

Eventually, Kate gets the best of her and saves Max, but of course, this is a horror movie and villainous scary children cannot die after only one attempt. Kate and Esther end up battling it out under a frozen pond and as it nears the end, Esther cries out for her “mommy” Kate to not let her die. How does Kate answer? She smashkicks her to the face with the line, “I’M NOT… YOUR FUCKING… MOMMY!”

It wasn’t quite “Smile, you son of a bitch!” or “Get away from her, you BITCH!” but it was still pretty amusing. Overall, I was surprised at how much I enjoyed it as I’d gone in assuming it was going to be a travesty of a movie. I cringed. I actually cried out when Esther was at her worst. I didn’t figure out the ending at all until it was revealed. So while it wasn’t an evil child classic, it was definitely worth my time and probably isn’t the best movie for couples looking to adopt little Russian children.

Seriously, I’d have second thoughts, no matter how many times I told myself it was just a movie. Isabelle Fuhrmann was that convincing. She was probably around 10 when she did this movie, so who knows what kind of psycho she is in real life. The fact that she’s now been cast as the psychotic knife killer Clove in The Hunger Games

should say something right there about her creepy factor.