Being a long time fan of the UFC, when I first saw the preview for Warrior, I wasn’t all that thrilled or interested in seeing it. However, I was still curious. On Friday, tweets were showing up online about how good it was. Then when I heard that you could see the teaser for The Hunger Games and that tipped me over. I told hubby we should see it and he said we could take in two movies, the other being Contagion.

The movie starts out at a rather slow pace, with background story of the troubled relationship between Tommy Riordon (Tom Hardy) and his father Paddy Conlon (Nick Nolte), a recovering alcoholic that tore his family in half 14 years ago. After a rather unpleasant reunion with his dad, Tommy joins a gym nearby that trains fighters in mixed martial arts. On a whim, Tommy offers to spar with the gym’s prize fighter, Mad Dog Grimes and in short, totally kicks his ass. This is how Tommy begins his ascent in the fighting world. He recruits his father as his trainer, on the assurance that this doesn’t change their relationship.

Meanwhile, the story is building around a grand prix martial arts event called Sparta, put on by the guys behind Tapout in Atlantic City (as opposed to Las Vegas for the UFC). The film’s focus then shifts over to Brendan Conlon (Joel Edgerton), who is Tommy’s estranged older brother. A former UFC fighter, Conlon is now a high school physics teacher (a character presumably based upon former math teacher and UFC champion Rich Franklin) and after a smug banker informs Conlon that he’s going to lose his house due to the banker’s own shitty advice, he enters the fight scene again by signing up for a parking lot event. After word gets around, Conlon gets suspended from his job, which then forces him to start fighting again. He joins an MMA gym run by an old friend named Frank and begins training with Frank’s prized fighter headed for Sparta.

There isn’t much suspense leading up to the event, since the trailer outright tells you that the final event ends up being the two brothers, but what was surprising and appealing for me was that while MMA was the medium for the story, the story itself was strong, emotional, and well laid out by Tom Hardy and Joel Edgerton. While both brothers share a common hatred for their father, we eventually learn that Tommy harbors a lot of hatred towards Brendan as well. Running from the abusive Paddy, Tommy had gone west with his mother, only to watch her die. Brendan, torn by his yearning to be loved by his father and by his love for his girlfriend (and now wife) Tess, stayed behind. His relationship with Paddy eventually dissolved.

The brothers continually abuse their father back for all the years they endured with him, rebuffing any and all of his attempts to make amends and this makes for a particularly emotional scene with Paddy as he regresses back into his alcoholism. While the fights leading up the finale were rather predictable, with Tommy simply tearing through everyone and Brendan fighting tooth and nail to the top, you really had no idea who was going to win and how it would all go down and this made for a great finale. In the end, the movie delivers an emotionally packed finish, which brought on rolling tears on my part. 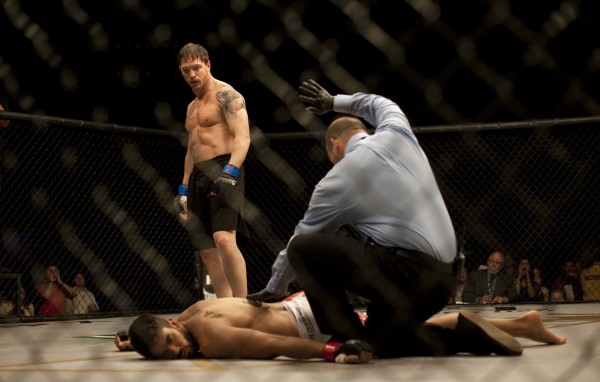 One particular downside of the movie was the actual cuts and shots of the fighting. Having watched hours and hours of live UFC fights, it was a bit of a push backwards as far as watching fights go, with the “necessary” shrieks of supportive fans or loved ones stuck in the midst, side plots, and lots of quick flashes of close up fighting that made it rather confusing to watch. Rounds went by in astonishingly quick succession and while this is done quite frequently in Rocky films, MMA bouts have a mere three rounds. I felt a little more time could have been put into the rounds rather than making it feel like you were watching a recap of a fight. Still, the takedowns were exciting and the coaching from Frank felt authentic.

The excited reactions of Conlon’s high school principal (Kevin Dunn) were refreshingly amusing and not all that far off from my own reactions while watching exciting fights.

The movie provided a few amusing cameos, with Rashad Evans and Stephan Bonner appearing as MMA experts, Nate Marquardt as a fighter, and WEC referee Josh Rosenthal as the Sparta referee. It pretty blatantly rips off from real people in the UFC, with Conlon modeled after Rich Franklin, the Russian fighter Koba clearly based on Fedor Emiliananko, a mouthy announcer with a heavy five o’clock shadow as the Joe Rogan of the film, and it felt to me like Mad Dog Grimes was loosely based on Rampage Jackson. It didn’t bother me all that much, as it all seemed to work in the context of the story. I still don’t really dig the title of the movie. I mean, I understand why they chose it, but I feel like it’s a very lazy choice of title and was actually awfully unfitting for the film.

All in all, I was very pleasantly surprised by the amount of emotion that they packed in. I’d gone in expecting a movie that glorified MMA, but instead, director Gavin O’Connor used MMA to tell the heartbreaking story of two brothers torn apart by domestic violence and their road to reconciliation.