Last night I was lucky enough to go to Breaking Dawn with some friends instead of alone, which was looking entirely possible with the stubborn refusal of my husband to go with me for this one. After Jacob ripped his shirt off in Eclipse and declared he was hot, I think he was done with Twilight forever. Which makes it a good thing that he didn’t go to Breaking Dawn because Jacob Black set an all time record here, ripping his shirt off in the first 2 minutes of the movie.

The movie heads straight into the wedding, with Alice sporting a rather unflattering haircut, but still doing her thing as your ultimate wedding planner. The Cullens start off with a nice humorous tone when Rosalie walks by carrying a huge piece of tree trunk asking, “What aisle?” Kristen Stewart looked really good, though she did look a bit too skinny once you saw her in the dress. Sure, women look great when they’re skinny, but they look great when they have asses as well. I wasn’t that impressed with the music at this point. I felt like someone other than Carter Burwell (who I have never been a fan of since Twilight) could have composed a much more elegant and fitting score for such a monumental occasion. 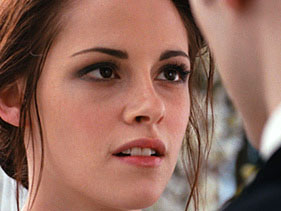 I admit, I teared up, just because it was a wedding and it was pretty. Plus, Billy Burke can really pull my strings as an actor. He’s always stood out to me as the best of the bunch, funnily enough. Jacob shows up to ruin Bella’s happy time, unintentionally, again. Edward whisks her off to their secret Isle Esme, making all us married women feel like our own honeymoon experiences could never compete with a private island off Rio de Janiero. When Bella asks for her human minutes to get ready for her first sexual experience, we’re treated to what’s possibly the worst getting-ready-for-sex music ever in some kind of pop rock song. As if that wasn’t bad enough, this continues to happen throughout the whole movie.

It’s not that the songs are bad, they just didn’t fit whatever was happening on screen. Whoever did the sound editing for this film needs to be fired for effectively making Breaking Dawn a lot shittier than it needed to be. There were quite a few end-of-tv-episode mood kind of songs played during scenes in the middle of the film that made you think, because of the trend of these types of songs, that something was ending when really it was just ordinary things happening, like Edward and Bella playing chess. And who the hell picked that god awful black and white striped shirt for Edward? He looked like he’d just stepped out of a 1980s JC Penney catalog.

After a decidedly tasteful sex scene, Bella wakes up amazingly fresh and giddy over her first time, which I find hard to believe since from what I can remember, having sex for the first time is more pain than awesomeness and she was having sex with a vampire afraid of killing her while making love. But okay, we’ll let Stephenie Meyer bask in this fantasy anyway. Edward shows her the bruises he gave her during the night and suddenly anyone with a vagina is forced to decide if they really want to remain on Team Sex Party Pooper. This was one part of the entire series that I felt like Bella had every right to be moping about because who the hell wants to be told they’re not going to have sex anymore once they’ve had it? Nice going, Edward. 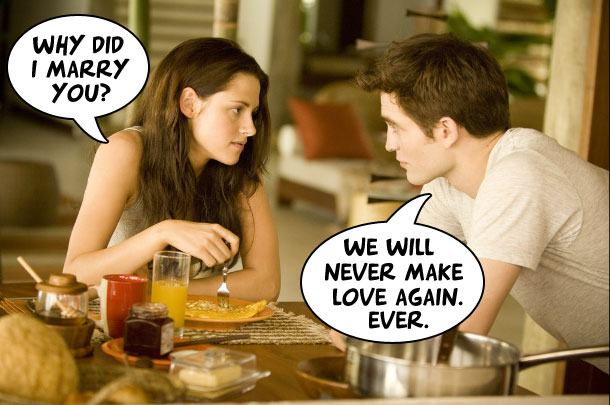 After the baby begins to punt Bella, Edward packs and they return home in secret. When Jacob discovers her at the Cullens, we get the first look of her emaciated face, which was done through CGI and really done quite well. She looks frighteningly awful, especially during a bathing scene with Rosalie when we see her bones poking through her skin. Once Jacob finds out, he’s so mad that he can’t help but phase and suddenly the whole pack knows.

The wolf pack talking was freakishly awful, with what sounded like 200 people trying to talk at once. That got annoying really fast. Is it so hard to just have them mind-talking without all the background noise? Jacob returns to the Cullens on his own and when Edward and Jacob have a word outside, I’m treated with something really good, which is the complete absence of the “melting man”.

I can’t remember the precise phrasing Meyer uses in this part of the book to describe Edward’s agony, but it just doesn’t compare to the agony I felt reading such awful, cheesy, and outright stupid words on a page. Someone who has read Breaking Dawn more recently than me can remind me exactly how she phrased it, but for now all I remember is it had to do with melting and Edward and it wasn’t good. I was on Team Bella at this point.

The scene where Bella gives her lame baby name ideas was awesomely hilarious, but the party is soon crashed by the baby. When Bella’s labor begins, her spine snaps and I was appropriately horrified, just like when I read the book, though they decided to leave out the volcano of blood that came gushing out of her throat, which I’m sure Kristen Stewart was thankful for. I wasn’t all that thrilled with the sudden change to a Saw-style horror version of her birth, but the details they needed were all there and I guess that’ll have to do. I admit to being caught up in the moment when Edward is trying frantically to save Bella.

When I was reading the books, I was extremely anti-Jacob, since I couldn’t figure out why he had to be such an asshole to Bella and yet so stubbornly drawn to her, but of course this all made sense once he looked at Renesmee. The scene was handled quite well, with Jacob flashing through his future with a very pretty, older version of the girl and a recap of his first description of imprinting and then Jacob simply falling to his knees with a thud while still gazing over Rosalie’s shoulder into her eyes. It was touching to see him humbled this way. If only his soulmate didn’t look so awfully computerized. Was it that hard to find a real baby to look his way?

The wolves come for Renesmee once they hear Bella is “dead”, and a big bad wolf fight ensues, but as Edward so annoyingly states for audiences, since you would think his family wouldn’t need an explanation, the wolves can’t touch anyone a wolf has imprinted on. “It’s their most sacred law, ever.” or something cheesy like that.

As a final touch, we get to watch as Bella’s body begins to heal. I thought the effects they used for her inner body dying were really cool, but watching her outer body transform was even cooler. It ends right where book fans would expect, with Bella’s eyes opening blood red.

That being said, people who are watching the movie that haven’t read the book were probably extremely frustrated with the entire experience. The whole first half of the movie is full of a storybook wedding, then a storybook honeymoon, then a droopy pregnancy. It’s purely for women. When the story finally begins to pick up, the movie ends. It made me glad that I couldn’t convince the Mr. to come because I know he would never have forgiven me for dragging him to see such drivel. And yet, as a fan of the series, despite the small flaws and the detestable music, the movie was overall a pretty enjoyable experience for me.

Seriously though, fire that sound editing team before they can touch Breaking Dawn 2.