When we bought the big water slide for Baby Girl’s birthday party, we knew it meant using it at least one more time for it to be worth the purchase price. We decided to use 4th of July as an excuse for a big water slide party again and in the end, we had 13 kids running around our yard squealing and sliding and flinging water balloons. I made hot dogs, fried burgers, and made three different types of Independence Day food! 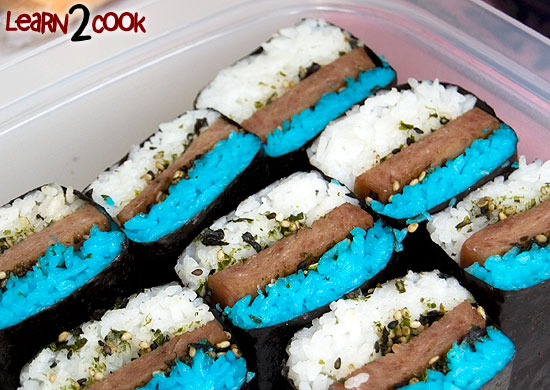 First up, Independence Day spam musubis, which is something I made a couple years ago when we went to see fireworks at Ala Moana. I made them again this year, but this time used Neon Blue food coloring and added a lot more so I got a great bright blue. 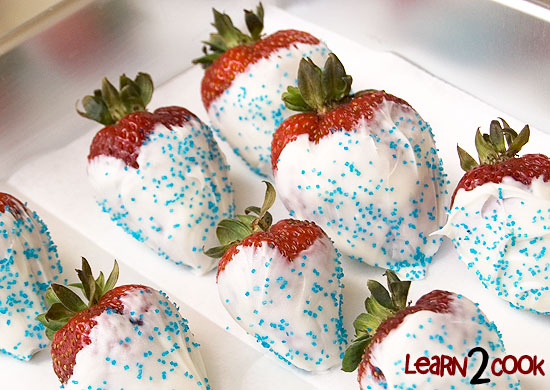 Next up, I had some Patriotic Strawberries, which I’d seen on Food Gawker the other week. It was sooo cute and so simple. All I did was wash the strawberries a few hours ahead of time so that they had enough time to dry, then melted white wafers, dipped them, and sprinkled them with blue crystals. 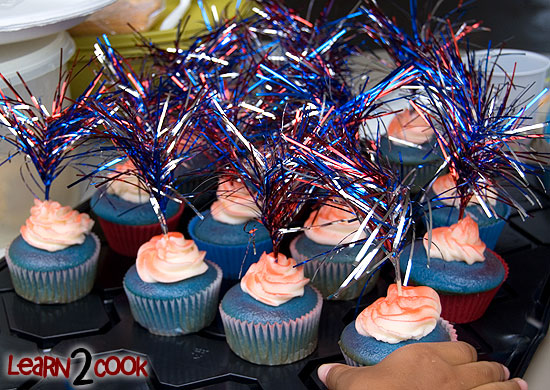 I had these cupcakes in the freezer unfrosted and when two parents dropped off their kids with store bought cupcakes, I figured that was enough. Apparently I totally underestimated how many cupcakes children can eat when adults are too busy setting up food, watching a water slide, and trying to eat at the same time. I suspect the kids went crazy and just kept going back for more.

Eventually, there was only one left and one of the neighborhood kids looks at me with this look of panic like, “Are there no more cupcakes??” I told him I’d go in the house and bake some more, went inside, frosted them, sprayed them, and added the sparkler picks I’d bought on clearance at Macy’s. I took them outside 10 minutes later and the kid was like, “YOU’RE THE BEST CUPCAKE BAKER EVER!!!” LOL!

I would have put more cream cheese frosting, but I only had half a batch and had to stretch it to frost all of them.

Other food that people brought included corn on the cob, watermelon, chili, Zippy’s chicken, macaroni salad, sherbert punch, grapes, cream puffs, mango bread, and chips. I was pretty fried by the end of the day, so I passed out with Baby Girl at 8 PM for 10 hours. Hope you all had a great 4th!