The other day, I headed to the market to buy our New Year’s eve food with my list in hand. I got everything for ozoni (Japanese New Year’s soup) except for the mochi because although Foodland usually sells komochi, they didn’t have anything but chi chi dango. Unacceptable! I made plans to go to Nijiya Market to look for mochi later.

Grandma J ended up coming over for dinner and she brought me some mochi from an old family friend. That night I fried up three and gobbled it up, not thinking to save some for the soup. Today when I went to Nijiya and bought two trays of komochi (this means small mochi). But they didn’t have the big kasane mochi, so I bought a bag of sweet rice to see if I could make my own mochi.

There are machines that make mochi, but a quick search on Amazon told me they cost about $275. No thanks. I read that you can use a bread machine, but sometimes they break. Since I just got my bread machine, the heck with trying that. Breaking your bread machine a week after you get it sounds just like something I’d do. I also read you can use a KitchenAid mixer, but since I don’t own one of those either, it meant doing it by hand.

Traditional old fashioned mochi pounding sessions use a giant stone mortar and a huge wooden mallet. Since I have neither and don’t desire to shell out bucks to buy them either, I figured it was basically the same thing to cook sweet rice and smash it with a little wooden stick until it was mochi. 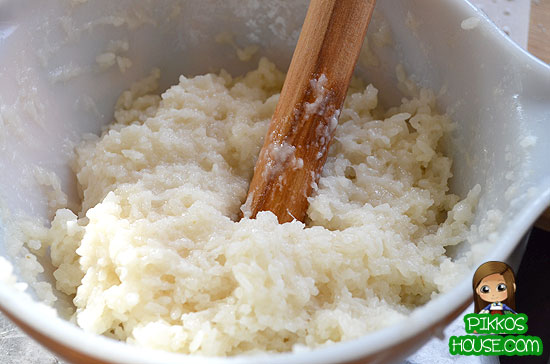 I cooked 3 cups of sweet rice in my rice cooker with the “Sweet” setting. I put half of it into a pyrex bowl and then started to smash it with my little wooden rolling pin that came with a fondant kit. I worked my poor arms to death, smashing it around for about half an hour. 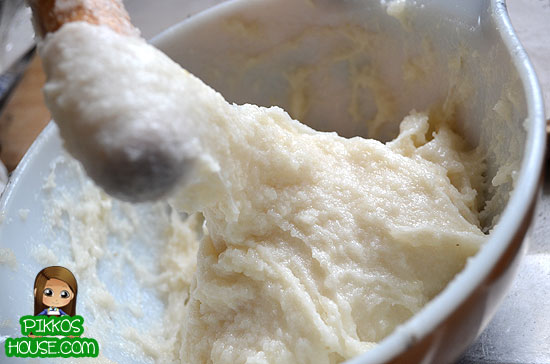 You can still see some of the grain bits in this. I had to concentrate on smashing against the side of the bowl to get as much as I could. I didn’t feel the need for it to be perfect, just good enough. 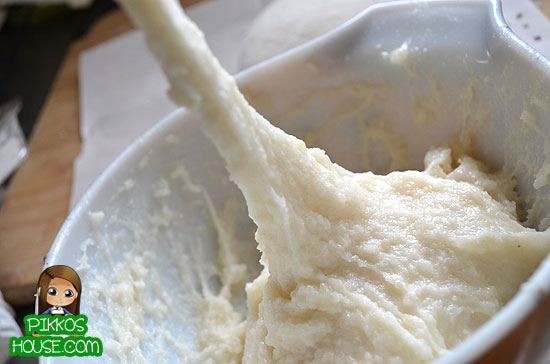 Here’s a different angle of my second batch. At this point I was too tired to go any longer, so I just stopped and formed up the upper mochi for my kasane. To form it, I wet my hands, pinched off how much I thought I needed, and then shaped it in potato starch. 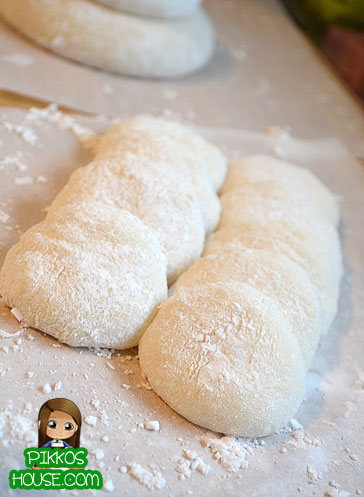 With the rest, I made 11 komochi. We fried two immediately to see how it tasted. It was great! You couldn’t event taste any unmashed rice! 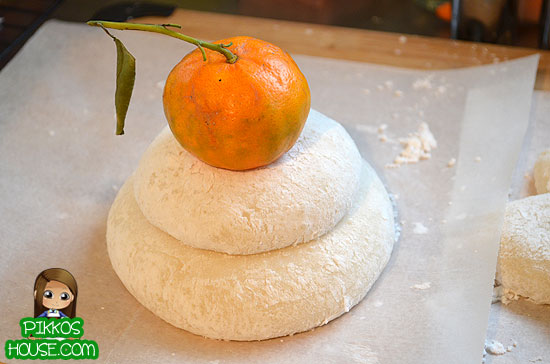 This is my finished kasane, which is still kind of droopy because it’s so fresh, but I go and buff it up every now and then. It came out pretty awesome, so even though my arms are falling off, I’m pretty pleased with myself! 😀

For some reason I seem to be heading into a year in which I make my own everything. With a bread machine I’m trying to make my own bread all the time. I’m fiddling around with recipes for lilikoi cheesecake popsicles. And now I’m even hand pounding my own mochi!