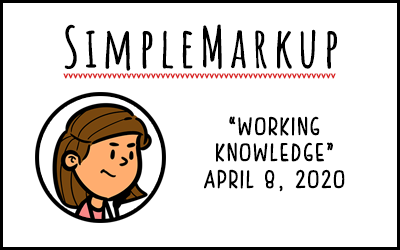 Well, it’s already the second week of April, and my family is entering Day 25 of self-isolation. My kids have thankfully gotten past the “tear each other’s heads off” phase, but they continue to “boredom eat.” That is, unless it’s leftovers. I’m the one who has to take care of that by myself, it seems.

It’s been tough focusing. I’d gotten my routine down. I’d been scheduling my social media posts pretty well. Was getting in lots of working hours. I was fairly on top of things. Then this happened! Still, work life has gone on, so I can only moan and groan for so long.

Anyway, this comic touches on how things have been with me, though definitely exaggerated. In March, I did some seed shopping, both online and during my last shopping trips to the hardware store (shoulda bought more potting mix, dang it!), and I’ve been working on seedlings for a couple of weeks now.

Thankfully, supply chain and local produce don’t really seem to be issues so far. Still, nothing makes you freak out over your own food security like the world coming to a screeching halt, and so I’m still planning on putting a lot of effort into a garden. I’m hoping to get things established before summertime, which is when the sun gets so hot that it mostly just fries any attempts I make at seedlings right in the ground.

That and composting. And worm composting, though I need to pick up worms later this week for that.