This is Part 3 of my review series on Simply Ming One-Pot Meals: Quick, Healthy & Affordable Recipes

, which begins to explore the recipes in the book and evaluates taste, accuracy, and difficulty level.

As mentioned in Part 1, the cookbook is split into five different sections. The recipe that I tried first is in the Saute section and I chose this because it was the first thing I could make without making a special trip to the market: Asian Spaghetti.

Plus, it sounded interesting. I mean, how can you not be intrigued by a spaghetti recipe that tells you to put soy sauce into the pot?!

I have to say that I’m not a big fan of the way he’s laid out his cooking instructions. I prefer numbered instructions and he does do this, but I suspect that they only did this to make the recipes look simpler than they really are.

For instance, the Asian Spaghetti recipe has only two steps: 1) cook the pasta and 2) cook everything else. This is laid out in paragraph form next to the numbers, so I really don’t get the point. It makes it hard to read. It’s not as if they were pressed for space either, the book has big gaping blank sections on the page.

The book doesn’t specify whether it’s 1 pound of cooked or uncooked pasta, so I just assumed it was uncooked and boiled a whole package of vermicelli. It says spaghetti in the list, but the picture quite obviously uses angel hair.

The ingredients call for 2 large onions, diced. Now, I have an onion-hating family yet love cooking with onions, but even I was a bit confused as to why so much onion was called for. 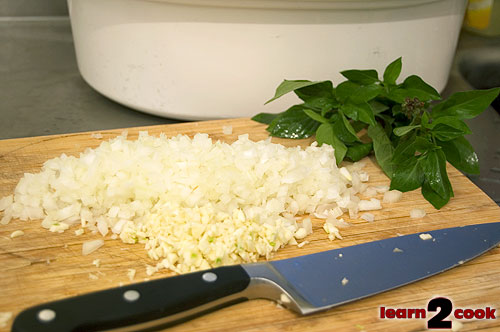 I ended up using only one large onion. I stopped there because that I started to feel like I was making Onion Spaghetti instead of Asian Spaghetti. This picture shows the minced garlic and Thai basil from the yard too. 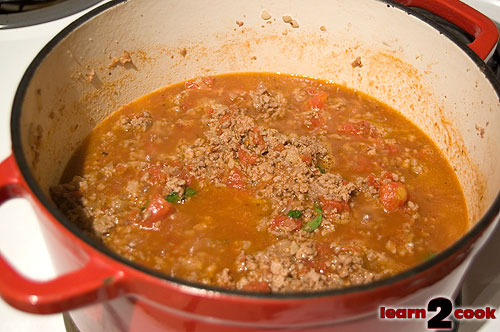 Next goes in two pounds of meat! The recipe asked for beef and pork, but this made my Weight Watchers Recipe Builder start sobbing, so I substituted turkey for the pork. Next to go in was 2 cans of diced tomatoes. The recipe asked for one 32 oz can of Roma tomatoes. I have no idea if such a product exists, but my initial Google search points to “Probably Not”.

Next, I added 2 tbsp tomato paste, 1/4 cup “naturally brewed” soy sauce, salt and pepper, and 1/2 cup of Thai basil. He’d made a point of insisting we use naturally brewed soy sauce, though I can’t remember what the reason was, but luckily Kikkoman is naturally brewed. As you can see, this is a lot of food, taking up half my pot. More on why this deserves mention soon. 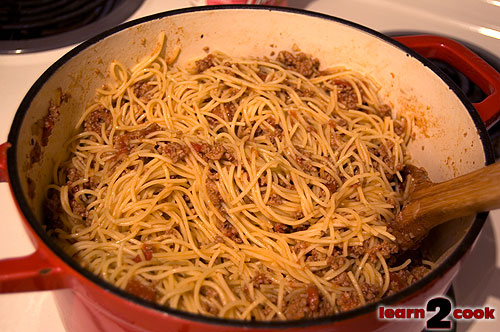 After all the noodles went in, the pot was full of tons of food. Here’s the thing: the recipe says this “Serves 4”.

Maybe four sumo wrestlers or four people who just got voted off of Survivor, but four regular people? A serving of pasta is approximately 1 cup and going by 4 servings, you’d be eating 2 full cups of pasta plus a half a pound of meat!! I plated one cup of Asian Spaghetti to see if maybe I was overreacting and this really did serve four. 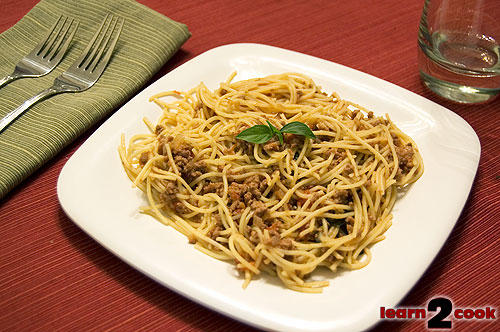 This is what is generally considered a proper serving of pasta and after eating this much, I was quite satisfied. I ended up taking another serving, but was full before I was halfway through my plate and therefore gave the rest to Mr. Pikko, who had taken 2 servings for himself. He generally always overeats.

The kids loved it, with Baby Girl eating through almost two servings too, but I suspect this was because she only picked at lunch. On a normal night, she’d probably eat 1 cup. When I asked her if she liked the taste or just the fact that it was noodles and she said she liked the taste.

I packed up the extras, being careful to measure out single portions and wrapping them in saran wrap before putting them in a bag to freeze. In the end, 15 cups of Asian Spaghetti came out of this recipe and I froze more than we could eat as a family in one night (9 servings frozen). That would mean that, according to the recipe, we could have had more than twice the amount of food we actually ate. I don’t know, maybe I was supposed to only add 1 pound of cooked pasta? Either way, it didn’t say. It seemed proportionally correct the way I did it. Personally, I think you could feed 8 people with this.

My Weight Watchers calculations put this at 6 points per single serving (1 cup). Not bad!

Taste-wise, I really enjoyed it. You could sense the soy sauce in there, but it wasn’t an unwelcome taste. Spaghetti is usually heavily tomato based, but this was a nice, light change. I probably didn’t put enough Thai basil as our bush hasn’t really taken off yet, but I could still taste it and it paired well with the other ingredients. I was very happy with the consistency after using the beef and turkey combination, enough where I probably won’t try this recipe with pork. It was very easy to make.

That being said, I don’t have a very good impression of the book’s editing so far with the slightly off details, paragraph instructions, and crazy serving sizes. The food itself seems to be in good shape though (having tasted 2 dishes at the demo and this one) and that’s obviously a good trait for a cookbook to have.

Here it is close-up: 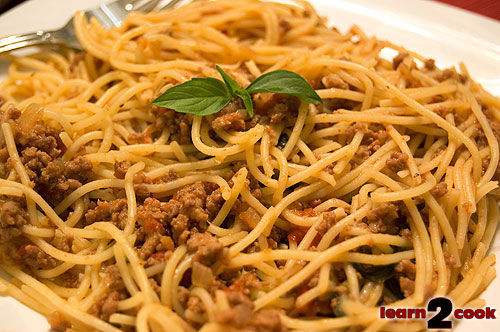