Back when I was in high school, my mom brought home some big bunch of greens and said the farmer’s market lady told her it was ong choi and easy to cook. With just some oil, garlic, and salt fried in a pan until the leaves are cooked down and you’re done.

She gave it a try and I don’t think I tried it the first time, but my mom loved it. Eventually I realized how amazing it was in both taste and health factor.

Then sometime in college I started seeing it sold in the grocery store and when I looked it up, I read something about it being a “swamp vegetable” and a “noxious weed”. I was just starting my kitchen experimentation phase (which I’m still in a decade later) while having to cook for myself and Mr. Pikko, who was then “just” my boyfriend and “roommate”, and so he’d be a good sport and try my dishes. As it turned out, he loved ong choi too and it became one of the few vegetables he actually enjoyed. It began showing up on Chinese food menus and we made it a regular item we ordered.

Fast forward to 2012 and we’ve got our growbed, which pushes out massive amounts of greenery. Here’s our new crop of lettuce coming up: 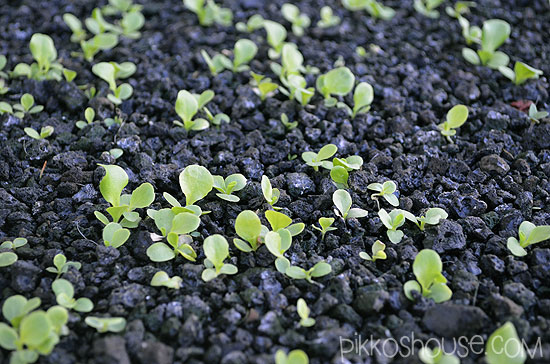 The growbed actually gets pretty insane when the lettuce is older. So much so that it’s difficult to pick lettuce. We’re not really into thinning, as you can see. It never seems to matter. We end up with about a month’s inventory of lettuce and have to start giving it away like crazy. That’s not really a bad thing though.

Mr. Pikko picked up some ong choi seeds one day earlier this year and planted a measly four plants just to see what happened.

What happened was we learned just why it’s called a noxious weed. 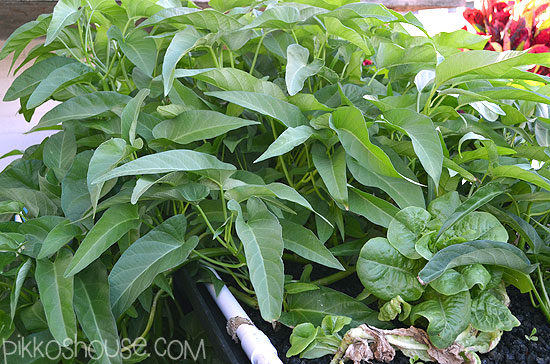 The plant is insane. This is still four plants, but it’s so much ong choi that even with me picking enough to equal 2 bunches at the market (about $4 each) I still can’t make a dent in the damn bush. This massive explosion of ong choi has been harvested around 5 times in the last couple of months and it still looks like you could get lost in it. 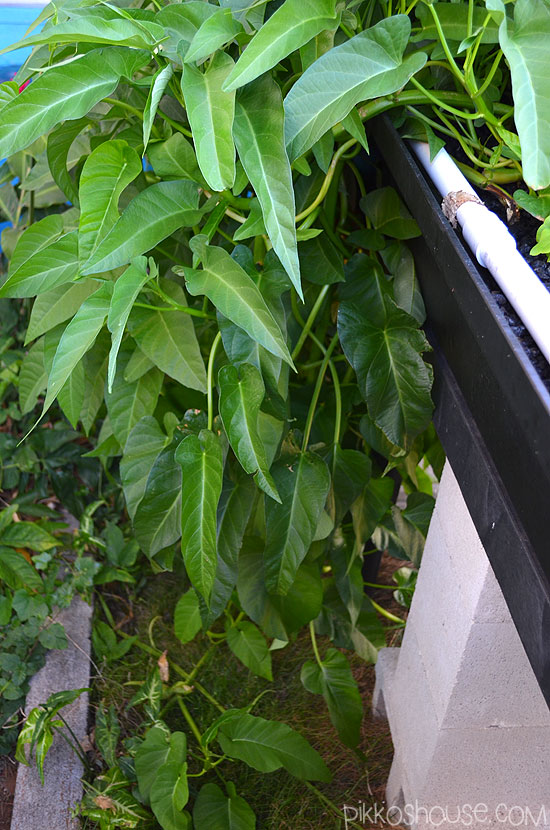 It’s even pouring down the sides!! Ahhhh! 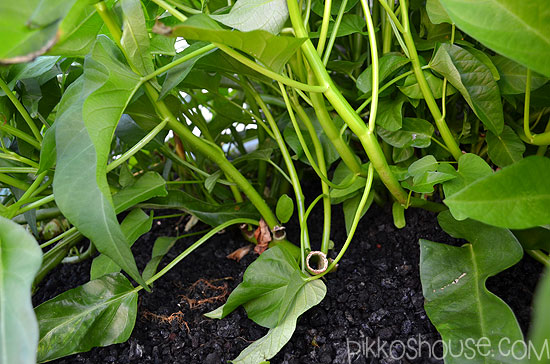 Seriously, $3.99 a bunch can add up and now I can pick and eat as much as I want. The only problem is that I’ve had to learn by trial and error how to pick and prepare ong choi you grow at home. In the market everything in the bunch is nice and young, but I have to determine the texture of the stalks myself since it’s basically just a wild and crazy plant that I don’t regularly trim or maintain. If I’m not careful we end up eating an extremely fibrous stalk that has the texture of rough bark.

I’ll post later about the method I’ve come up with so far, which is actually kind of embarrassing, but seems to get the job done so far. And hey, if it works, it works.