Although I will be 34 this year, this New Year’s is the first time I’ve made my own ozoni. Ozoni is a Japanese New Year’s soup that I can remember eating from small kid time, but I usually just eat soup other people prepare. From eating it through the years, I knew what the basics were, but I wasn’t sure about a recipe, so I asked around Twitter and Facebook. The responses I got and the articles I found online all seemed extremely basic. So although I got some helpful tips, I ended up deciding it was simple enough for me to just wing it.

The traditional soup is made with dashi stock, but I love chicken stock, so I went with that, deciding that I would slow simmer the bones from the chicken thighs I bought after cutting all the meat off.

First hiccup: I had bought boneless chicken. Oops!! With the bone boiling out the window, I just went with good old water and chicken bouillon. 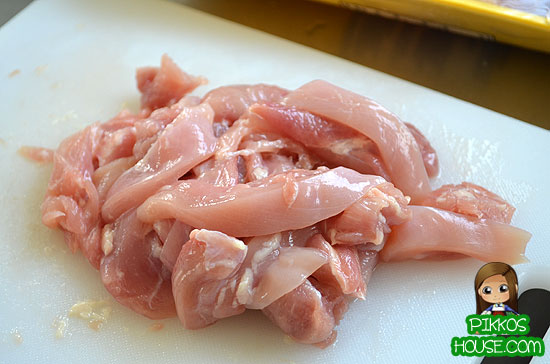 Since you want nice, soft pieces of chicken in your soup, you need to cut up thigh meat. After slicing it thinly, I added it to the stock. 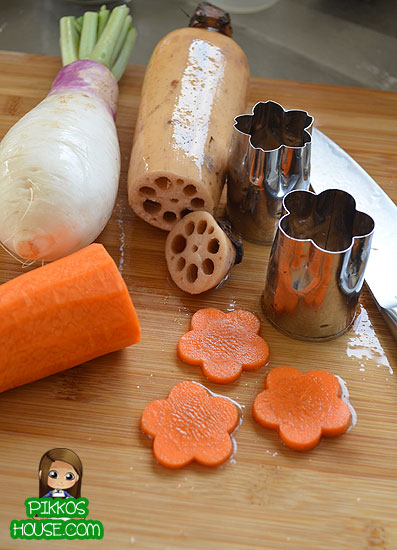 Most recipes I saw online only called for carrots and a green veggie, but I remember daikon and lotus in our family’s soup, so I bought both. I brought out my sakura and flower cutters and made pretty veggie shapes! 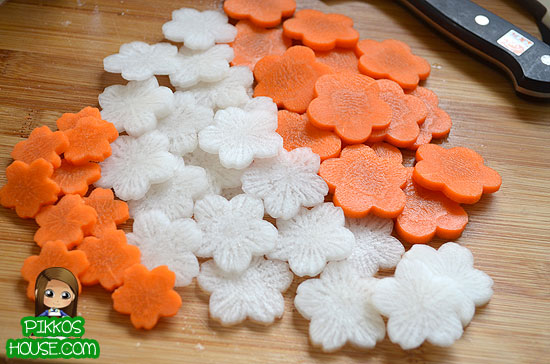 I made a mistake and put these in too early, so they were really soft and falling apart by the time midnight came around. Next time I’ll add them to the soup at around 9 pm instead of dumping them in at 4 pm like I did. I let it simmer for hours, adding in sliced age (fried tofu pockets) and uzumaki kamaboko (the swirly round one). I can’t remember what the age was called, but it wasn’t the kind you use to make inarizushi. It was the big puffy pockets. All the veggies and the age simmered together to make an amazing broth, so I was very happy with it.

I forgot to take more pictures after the carrots. Sorry! 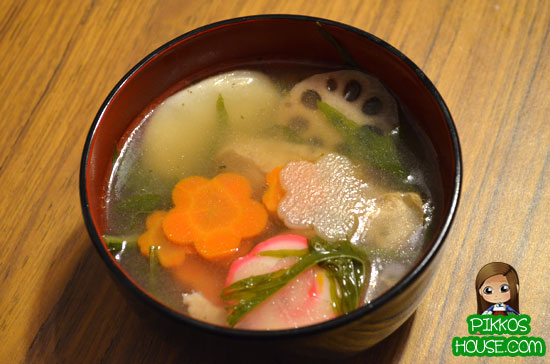 I added mizuna last for the green veggie. My family used to put knotted wakame and although I used to like it back then, for some reason I just did not want to put it into my own soup.

Before serving, I fried komochi (you can see it in the top right of the bowl) and then put it in. Everyone loved the soup! Thanks to everyone who offered me advice!